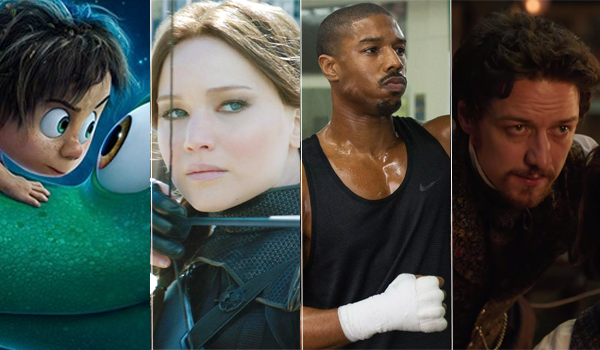 IMAX grosses made up an estimated $5.7 million of the overall five-day take for The Hunger Games: Mockingjay - Part 2.  The ten-day IMAX total for the film stands at $15.1 million, which represents 7.6 percent of the film's overall gross.

The Good Dinosaur opened in second place with an estimated three-day take of $39.19 million. The latest 3D computer animated film from Disney and Pixar debuted below expectations and delivered the lowest opening weekend performance for a Pixar film since the $33.26 million take of A Bug's Life way back in 1998. When adjusting for ticket price inflation the three-day weekend gross for The Good Dinosaur was the lowest ever for a Pixar film. At the same time, The Good Dinosaur did register the fourth largest three-day Thanksgiving weekend debut on record (without adjusting for ticket price inflation). The Good Dinosaur has grossed $55.57 million in five days, which gave the film an estimated five-day weekend to three-day weekend ratio of 1.42 to 1. The film is running 19 percent behind the $68.71 million five-day Thanksgiving start of 2010's Tangled. Going forward, The Good Dinosaur will likely hold up very well thanks in part to the relative lack of strong family alternatives to Disney's Star Wars: The Force Awakens throughout the holiday season.

The Good Dinosaur received a strong A rating on CinemaScore, which is a promising sign going forward. The audience breakdown for the film skewed towards female moviegoers (53 percent) and towards moviegoers 25 years and under (58 percent). Family audiences represented 79 percent of the film's overall audience (in comparison, families made up 71 percent of the opening weekend audience for Inside Out earlier this year).

Warner and MGM's Creed took in an estimated $30.12 million to open in third over the three-day frame. The critically acclaimed seventh installment of the Rocky franchise outpaced expectations with a strong five-day start of $42.60 million. With an estimated five-day to three-day ratio of 1.41 to 1, Creed was also quite back-loaded for a non-holiday opener aimed at adults over Thanksgiving weekend. That is a good early sign for the film going forward. Without taking into account for ticket-price inflation, Creed registered the tenth largest three-day Thanksgiving weekend debut on record. Creed opened an extremely impressive 95 percent ahead of the $21.85 million five-day pre-Christmas start of 2006's Rocky Balboa. However, it should be noted that as a Thanksgiving release, Creed is likely to be more front-loaded than Rocky Balboa was. In a month full of wide releases that have failed to live up to expectations, Creed already looks to be a much needed exception to that trend.

Like The Good Dinosaur, Creed also received a healthy A rating on CinemaScore. The audience breakdown for the film skewed heavily towards both male moviegoers (66 percent) and moviegoers over the age of 25 (62 percent).

Spectre claimed fourth place with an estimated three-day take of $12.80 million. The latest installment of Sony and MGM's James Bond franchise was down 15 percent from last weekend. That represented a very solid holiday hold for the film, especially given the strong start of Creed. Spectre has grossed $176.05 million in 24 days. That places the film 16 percent ahead of the $151.62 million 24-day take of 2008's Quantum of Solace and 28 percent behind the $245.59 million 24-day gross of 2012's Skyfall. Spectre took in an estimated $18.15 million over the five-day frame.

The Peanuts Movie rounded out the weekend's top five with an estimated $9.70 million. The 3D computer animated adaptation from Fox and Blue Sky fell 27 percent from last weekend. That represented a significant decline for a family film over Thanksgiving weekend, especially given the lower than expected start of The Good Dinosaur. The Peanuts Movie has grossed $116.76 million in 24 days, which places the film 22 percent behind the $149.28 million 24-day take of 2012's Wreck-It Ralph. The estimated five-day holiday take for The Peanuts Movie stands at $13.60 million.

On the heels of last weekend's underwhelming start, Sony's The Night Before held up nicely this weekend with an estimated sixth place take of $8.20 million. The R-rated comedy starring Joseph Gordon-Levitt, Seth Rogen and Anthony Mackie was down 17 percent. The Night Before has grossed $24.11 million in ten days and is likely to continue to hold up well throughout the holiday season. The film is currently running 4 percent ahead of the $23.24 million ten-day take of 2011's A Very Harold & Kumar 3D Christmas. The Night Before took in an estimated $11.50 million over the five-day frame.

Meanwhile, Fox's Victor Frankenstein was absolutely lifeless this weekend with an estimated twelfth place start of just $2.35 million. The horror film starring Daniel Radcliffe and James McAvoy has only managed $3.44 million through its first five days of release, which gives the film an estimated 5-day to 3-day ratio of 1.46 to 1. Victor Frankenstein obviously opened well below its already modest expectations and won't stick around in theatres long after this weekend's poor start. The film received a soft C rating on CinemaScore.

The news was far better for both Spotlight and Brooklyn, which took in respective estimated three-day grosses of $4.50 million and $3.83 million. Open Road's Spotlight was up 27 percent over last weekend upon expanding into an additional 299 locations, while Fox Searchlight's Brooklyn was up 230 percent upon expanding into an additional 845 locations. Respective 24-day grosses for the awards season hopefuls stand at $12.35 million for Spotlight and at $7.29 million for Brooklyn. For the five-day frame Spotlight took in an estimated $5.73 million and Brooklyn took in an estimated $4.85 million.

Saturday Update: Please note that figures and totals are a mix of estimates and actuals reported by the studios due to the holiday weekend.

Lionsgate reports that The Hunger Games: Mockingjay - Part 2 added an estimated $21.25 million on Black Friday, bringing its 8-day domestic total to $168 million. That puts the final film of the franchise 13 percent behind the pace of last year's predecessor. BoxOffice is projecting a $50 million 3-day weekend for Part 2's sophomore frame, and an overall 5-day holiday weekend take of $74.15 million. Both figures will give the blockbuster pic another first place crown this weekend.

In second place on Friday, The Good Dinosaur posted $15.66 million in its third day of release. That gives the original Pixar film a domestic sum of $32.04 million since opening on Wednesday. By comparison, that puts it 24 percent ahead of the pace of A Bug's Life (Pixar's last non-sequel to open wide over Thanksgiving weekend, which earned nearly $26 million over the Wed-Thu-Fri frame of Thanksgiving weekend in 1998) and 19 percent behind the more recent Tangled (a Disney Animation film). This is also the first Pixar film to open outside of summer since 2004's The Incredibles. While the figures are below expectations for Good Dinosaur, early word of mouth is healthy and the long holiday season will give it plenty of life in the weeks to come. BoxOffice is projecting a $38.5 million 3-day weekend and $54.9 million for the overall 5-day opening.

In a strong third place yesterday, Warner Bros. and MGM report that Creed knocked out another $11.7 million. That brings the franchise revival pic's three-day domestic sum to $24.2 million as very strong reviews and word of mouth continue to accelerate its momentum. The film is trending 29 percent ahead of the inflation-adjusted three-day start of 2006's Rocky Balboa (65 percent when not adjusting) and is certain to keep up the strength of its early run as we head into December. BoxOffice is projecting a $30 million three-day weekend, giving it an impressive overall $42.5 million five-day launch.

Spectre took fourth place on Friday with an estimated $5.285 million. The latest James Bond flick has tallied $168.54 million domestically now. Look for a three-day haul of $12.8 million and five-day take around $18.2 million.

The Peanuts Movie filled out the top five with $4 million yesterday, bringing its total up to $111.1 million. BoxOffice projects a $9.8 million three-day / $13.7 million five-day weekend.

The Night Before continues to build on its healthy word of mouth as it tagged $3.23 million on Black Friday. With $19.1 million in the bank so far, the holiday comedy is poised to display legs heading into Christmas season. Look for an $8 million sophomore three-day weekend, making for an $11.35 million five-day holiday frame.

Meanwhile, Victor Frankenstein continues to struggle after three days of play. With $905,000 on Friday, the film's tally since opening on Wednesday is $1.99 million. We're projecting a $2.3 million three-day frame and $3.39 million five-day overall opening.

Below is how the weekend's top 13 are shaping up:

Thursday Update: Due to the Thanksgiving holiday today, studios will only be reporting unofficial estimates. Below are Wednesday's top films:

Wednesday Update: Warner Bros. and MGM report that Creed bagged $1.4 million from Tuesday night's early screenings, setting a new record for Tuesday pre-shows ahead of Thanksgiving. By comparison, last year's Horrible Bosses 2 pulled $1.0 million from Tuesday screenings ahead of the holiday. While the comparison between the titles pretty much ends with their release positioning, this is great news for Creed as not just a sequel with a significant fan turnout early on, but as a film garnering strong reviews and very positive early word of mouth. Creed looks to be a top choice for adult audiences over the extended weekend.

Starting with a very encouraging launch of its own, Disney/Pixar's The Good Dinosaur tallied $1.3 million from early shows last night. Disney reports that figure exceeded the $1.2 million Tuesday night launch of Frozen two years ago -- however, it should be noted that Pixar's considerable built-in fan base may be responsible for such a high turnout early on. Dinosaur's gross was also in line with Big Hero 6's $1.4 million Thursday night start in early November last year.

Victor Frankenstein posted $175,000 last night, according to various sources. Comparisons are few and far between for pre-Thanksgiving openings in this case, but that number is certainly an underwhelming one heading into the extended holiday frame. Unfortunately, buzz for the film has never really picked up during the pre-release marketing cycle.

Meanwhile, The Hunger Games: Mockingjay - Part 2 will remain a force to be reckoned with this weekend as it hopes to give Good Dinosaur a run for first place.