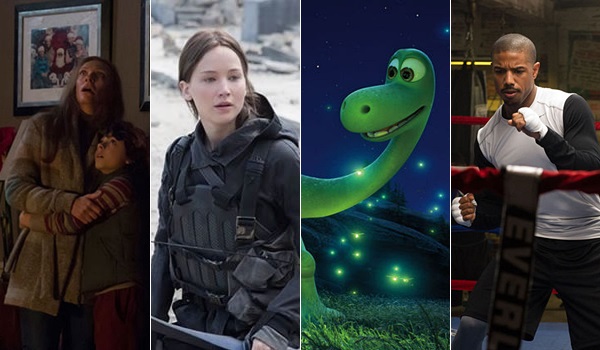 Krampus debuted in second place with an estimated $16.02 million. The holiday themed PG-13 horror film from Universal outpaced expectations and performed very nicely with its modest production budget in mind. The film's debut was made even more impressive by the fact that the weekend after Thanksgiving weekend is historically one of the toughest weekends of the year to open a film in wide release. While different genres, the opening weekend performance of Krampus was right in line with the $16.01 million start of 2013's Tyler Perry's A Madea Christmas. Like A Madea Christmas, Krampus will hope to see its holding power aided by the holiday season.

Krampus opened with $6.01 million on Friday (which included an estimated $0.64 million from Thursday evening shows), increased 10 percent on Saturday to gross $6.59 million and is estimated to fall 48 percent on Sunday to gross $3.42 million. That places the film's estimated opening weekend to Friday ratio at 2.67 to 1, which is promising for a horror film. Krampus was aided by having four-quadrant appeal this weekend, as the film's audience skewed slightly towards moviegoers under the age of 21 (51 percent) and was evenly split between genders. Krampus received a B- rating on CinemaScore, which is solid by horror film standards and is an encouraging sign for the film going forward.

It was a very close fight between Creed and The Good Dinosaur for third place this weekend.  Warner and MGM's Creed currently has the slight edge for third with an estimated $15.54 million. The critically acclaimed seventh installment of the Rocky franchise was down 48 percent, which represented one of the weekend's stronger percentage holds among wide releases. In comparison, 2006's Rocky Balboa fell 43 percent in its second weekend to gross $10.57 million. Creed has grossed a stronger than expected $65.14 million in twelve days. That places the film a healthy 36 percent ahead of the $47.94 million twelve-day gross of Rocky Balboa. Going forward, Creed will hope to hold up well against increased competition with the aid of its strong word of mouth.

The Good Dinosaur followed in fourth with $15.51 million. The 3D computer animated film from Disney and Pixar fell a sharp 60 percent from last weekend. Non-holiday themed family films typically experience sharp declines the weekend after Thanksgiving weekend. In comparison, 2010's Tangled fell 56 percent in its second weekend to gross $21.61 million. With a twelve-day start of $75.95 million, The Good Dinosaur is running below pre-release expectations and 21 percent behind the $96.57 million twelve-day take of Tangled. It will be especially important for The Good Dinosaur to stabilize next weekend, especially with Disney's Star Wars: The Force Awakens entering the marketplace the following weekend.

In semi-wide release, Open Road's Spotlight and Fox Searchlight's Brooklyn placed in eighth and ninth respectively with $2.93 million and $2.43 million. Spotlight was down 34 percent from last weekend upon adding another 83 locations. Brooklyn was down 38 percent upon adding 61 locations to its count. Respective 31-day grosses for the awards season hopefuls stand at $16.63 million for Spotlight and at $11.21 million for Brooklyn.

Saturday Update: Universal reports that Krampus bowed in first place on Friday with an estimated $6.01 million. That's just about 12 percent behind the $6.82 million first day of the studio's Unfriended earlier this year, a fellow PG-13 horror/thriller. Krampus' proximity to the Christmas season could help it in the long run with both teen and horror fan accessibility. Critics' reviews are fair for the genre (65 percent on Rotten Tomatoes) while early word of mouth is similarly decent relative to similar titles (68 percent on Flixster). BoxOffice is projecting a solid $15 million opening weekend for the modestly budgeted production.

Lionsgate reports The Hunger Games: Mockingjay - Part 2 claimed second place yesterday with $5.62 million. That brings the franchise finale's domestic haul up to $214.1 million through 15 days of play. BoxOffice projects an $18.6 million third weekend, which would give it a third straight weekend finish in first place.

Creed claimed third place on Friday with another $4.605 million, bringing its 10-day haul to a strong $54.2 million. The film continues to outpace 2006's Rocky Balboa thanks to strong word of mouth and reviews. BoxOffice projects a $15.2 million sophomore frame.

Disney/Pixar's The Good Dinosaur added $3.41 million on Friday, giving it a new total of $63.85 million. While the film has fallen shy of pre-release tracking expectations, it's poised to enjoy a healthy run over the rest of the holiday season with positive word of mouth. Look for a sophomore weekend around $15.5 million.

Spectre filled out the top five with $1.6 million yesterday. That gives the latest James Bond film a domestic tally of $180.7 million through 29 days of release. BoxOffice projects a $5.5 million weekend.

The Night Before added $1.58 million just outside the top five on Friday. Its domestic total is now $28.65 million as it continues to enjoy positive word of mouth. BoxOffice projects a $5.0 million frame.

Last but not least, The Letters bowed to a disappointing $245,000 from 886 locations on Friday. Freestyle's latest faith-based drama is unfortunately performing below the level of the year's earlier successes in the genre and looks to net a $1.1 million opening weekend.

Friday Morning Update: Sources report that Krampus earned an estimated $637,000 from shows beginning at 7pm last night. That tops The Last Witch Hunter's $530,000 early launch in October, which went on to a $10.8 million opening weekend. It's also comparable to Unfriended's $660,000 start in April (it took in $15.8 million for the weekend).

The film's PG-13 rating will certainly help to pull more than just horror fans with teens also having access to the film. For the weekend, though, Mockingjay - Part 2 is expected to three-peat in first place. The Good Dinosaur and Creed also have their sights set on holding firm in second and third places if they can hold off Krampus.