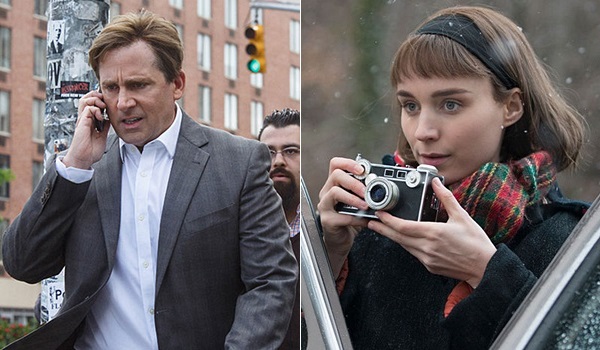 Paramount's The Big Short was off to a terrific start this weekend with an estimated $720,000 from just 8 locations. That gave the Adam McKay directed ensemble comedy-drama an impressive per-location average of $90,000 for the frame. In addition to its strong star power in Christian Bale, Steve Carell, Ryan Gosling and Brad Pitt; The Big Short appears to have been aided by strong critical reviews (the film currently boasts an 86 percent Tomatometer on Rotten Tomatoes) and by receiving four Golden Globe nominations on Thursday. The platform launch for The Big Short was fairly similar to the platform launch of 2013's American Hustle, which grossed $740,455 from 6 locations (for a per-location average of $123,409). The Big Short looks to be in very nice shape for its scheduled wide release on Wednesday, December 23.

In its first expansion, The Weinstein Company's Carol took in an estimated $336,924 from 16 locations. That gave the Todd Haynes directed romantic drama starring Cate Blanchett and Rooney Mara a healthy per-location average of $21,058 for the frame. Carol surpassed the $1 million mark this weekend and has grossed $1.22 million through 24 days of platform release. On Thursday, Carol received five Golden Globe nominations, including nominations for Best Drama, Best Director and Best Actress in a Drama nominations for both Blanchett and Mara. The Weinstein Company plans on continuing to expand Carol very slowly going forward.

On the heels of Golden Globe nominations for both Bryan Cranston (Best Actor in a Drama) and Helen Mirren (Best Supporting Actress), Bleecker Street's Trumbo held up nicely this weekend with an estimated $811,000 from 554 locations. Trumbo was down just 15 percent from last weekend and has grossed $5.45 million in 38 days. Before long, Trumbo will surpass the $7.45 million gross of this year's I'll See You In My Dreams to become the highest grossing film in Bleecker Street's short history as a distributor.

In its second weekend, Roadside's Chi-Raq took in an estimated $574,000 from 285 locations. The Spike Lee directed film starring Nick Cannon, Wesley Snipes and Teyonah Parris was down a sharp 52 percent, though it should be noted that Chi-Raq lost 20 locations this weekend. With a ten-day take of $2.11 million, Chi-Raq has already nearly matched the $2.19 million final gross of 2013's Oldboy.

As they both expanded into counts of just over 100 locations, Universal's Legend and The Weinstein Company's Macbeth both failed to impress this weekend with respective estimated grosses of $301,000 and $251,000. Legend had a per-location average of $2,813 for the frame, while the per-location average for Macbeth stood at just $2,324. Respective total grosses stand at $1.38 million for Legend in 24 days and at $348,939 for Macbeth in ten days.

Meanwhile, Fox Searchlight's Youth had a modest expansion with an estimated $100,000 from 17 locations. The Paolo Sorrentino directed film starring Michael Caine, Harvey Keitel and Rachel Weisz was up 28 percent over last weekend (when it was in just 4 locations) and earned a per-location average of $5,882 for the frame. Youth has grossed $211,233 in ten days of platform release.