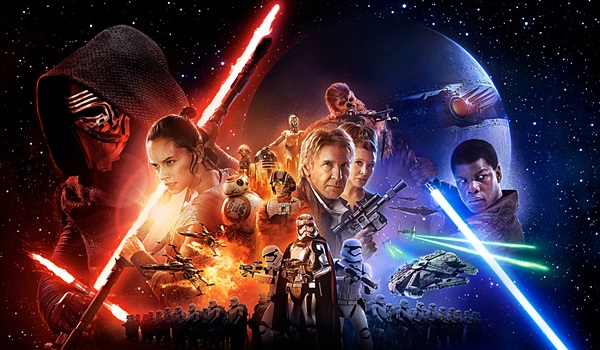 LOS ANGELES - December 15, 2015 - The long-awaited "Star Wars: The Force Awakens" has blasted to the top of Fandango's Fanticipation movie buzz indicator with a rare 100 out of 100 points. As Fandango's top advance ticket-seller of all time, "The Force Awakens" has obliterated records, outselling all previous titles in the company's 15-year history at the same point in the Fandango sales cycle.

"After years of fevered anticipation, the biggest pre-selling movie in Fandango's history finally reaches theaters this weekend," says Fandango Chief Correspondent Dave Karger. "The box office figures and audience reaction for this exciting, shocking, and crowd-pleasing blockbuster will be staggering."

According to a survey of more than 1,000 "Star Wars" moviegoers on Fandango:
Among the new "Star Wars" characters, Rey (Daisy Ridley) is the one that moviegoers are most excited to see in "The Force Awakens."
90% are looking forward to J.J. Abrams' vision of the "Star Wars" universe;
86% say the film's carefully-guarded story secrets have increased their interest;
84% are particularly excited to see the new female leads in "The Force Awakens;"
82% are even more excited to see "Force Awakens" because "Empire Strikes Back" and "Return of the Jedi"'s Lawrence Kasdan co-wrote the screenplay.
About Fanticipation
Known for having its finger on the pulse of moviegoers, Fandango's movie buzz indicator, Fanticipation, provides statistical insight into the movies fans are planning to see in a given weekend. Fanticipation scores (based on a 1 to 100-point scale) are calculated via an algorithm of Fandango's advance ticket sales, website and mobile traffic, and social media engagement. Fanticipation is not intended as a forecast of the weekend box office; it is a snapshot of movie fan sentiment. Fandango is the nation's leading digital destination for moviegoers and fans with more than 42 million unique visitors per month.*