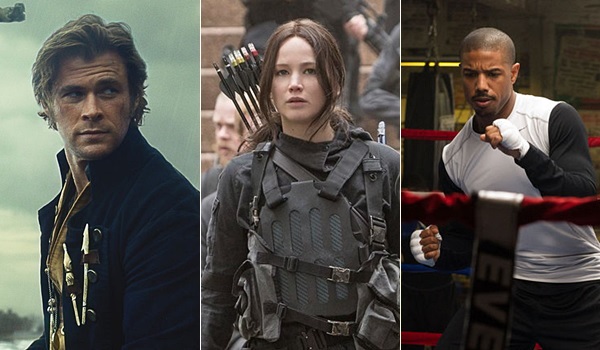 Warner's In the Heart of the Sea remained in first place on Tuesday with $1.36 million. The pricey Ron Howard directed adventure drama starring Chris Hemsworth was up 29 percent over Monday's performance. In the Heart of the Sea continues to disappoint in a big way with a five-day start of just $13.47 million. That places the film a lackluster 52 percent behind the $28.30 million five-day launch of last year's Exodus: Gods and Kings (which increased 12 percent on its first Tuesday to gross $2.21 million). With Disney's Star Wars: The Force Awakens entering the marketplace this weekend, In the Heart of the Sea and holdovers in general are highly likely to experience sharp weekend declines.

Warner and MGM's Creed remained in third with $1.06 million. The critically acclaimed seventh installment of the Rocky franchise increased 22 percent over Monday and decreased just 24 percent from last Tuesday. Creed continues to exceed expectations with a three-week take of $81.25 million. The film is currently running a healthy 32 percent ahead of the $61.48 million three-week gross of 2006's Rocky Balboa.

The Good Dinosaur was up one spot over Monday to move into fourth on Tuesday with $0.878 million. The 3D computer animated film from Disney and Pixar was up a healthy 45 percent over Monday and down a slim 18 percent from last Tuesday. The Good Dinosaur has grossed a softer than expected $90.96 million in three weeks, which places the film an underwhelming 22 percent behind the $117.27 million three-week gross of 2010's Tangled.

Universal's Krampus was down one spot from Monday to round out Tuesday's top five with $0.773 million. The modestly budgeted holiday themed PG-13 horror film was up 26 percent over Monday and down 36.5 percent from last Tuesday. Krampus has grossed a stronger than expected $29.95 million in twelve days and is set to surpass the $30 million mark today.

On the platform front, Paramount's The Big Short continued to impress with $58,349 from 8 locations. That gave the Adam McKay directed ensemble comedy-drama a strong per-location average of $7,294 for the day. Thanks in part to its strong cast, strong critical reviews and awards season buzz, The Big Short has grossed $830,206 through five days of platform release. Based on its performance so far, The Big Short looks to be in good shape for its scheduled wide release on Wednesday, December 23.

Tags: In the Heart of the Sea, Mockingjay - Part 2, Creed, The Good Dinosaur, Krampus, The Big Short, north-america