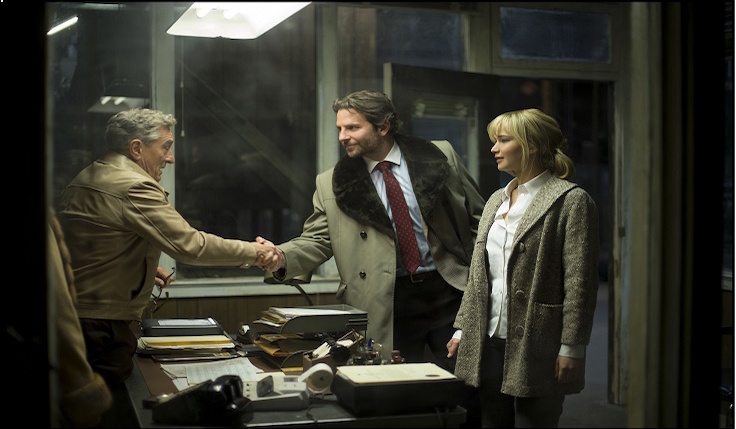 Since 2010 filmmaker David O. Russell has had a particularly strong streak of productivity; he's directed, at a frenetic pace of nearly one film a year, three of the most memorable films of the current decade. The streak is still alive with Joy, Russell's eighth feature film and third consecutive collaboration with star Jennifer Lawrence. Joy tells the story of Joy Mangano, the inventor and entrepreneur who developed the self-wringing Miracle Mop and found success through the home-shopping cable channel HSN. Lawrence portrays the working-class single mother as she navigates the treacherous challenges of-and conflicts between-entrepreneurship and family. BoxOffice joined David O. Russell to talk about his latest feature film.

You've already tackled real-life subjects in your films, notably in The Fighter, where, instead on focusing on the parts of Mickey Ward's career that were ripe for a big-screen adaptation, you focused on a more personal period in his life, telling essentially a story about how family can be a blessing but also hold us back. Silver Linings Playbook is similar in that way; the protagonists eventually take charge and break free from family expectations. Joy is very similar, but the story isn't as focused on one period in Joy Mangano's life. It spans many years, like a biopic would, to tell her story.

It's not a biopic. We made a cinematic fable about a girl from girlhood to adulthood, defining her by the world she grew up in until she wakes up and makes that world her own.

The families in the films I just mentioned become obstacles that hold the protagonists back in one way or another. That's something that resonates very clearly in Joy, but it's never presented in a cynical way. There doesn't seem to be any lingering bitterness in your depiction of these families.

You mean in being sincere about it? That's what I like about it. I like taking ordinary people who have done extraordinary things. I'd say that's true of all the movies that I've done. Treating them with the dignity and seriousness as they treated their own lives, including the guy who ran the little cable station in Lancaster, Pennsylvania -he treated it like it was a motion picture studio.

You use soap operas as a motif throughout the film, toying with the melodramatic mode in a way similar to Pedro Almodovar; there's a playfulness to it that embraces its more camp aspects. You open the film with a soap opera clip and continue calling back to it throughout the story. Why did you want to give that so much prominence in the film?

The true mother had retired from the world and watched soap operas, so I thought that was part of the little girl's psyche: the little girl's soap operas and the father's garage where metal was made, the sister who is somewhat envious, and the Latino singer. This is what made her life until she changed her own course. I also find soap operas kind of fascinating because in some ways she's a prisoner of her family's soap opera until she liberates herself from it. I find that in many ways some things are a lot like soap operas, including Russian literature. I love the emotional stakes of life, soul, death-the stories they tell.

The domestic space is very important in your films; you have this knack of featuring distinctly middle- and working-class homes in your films. In Joy the house takes on a special kind of importance.

It's a very important world inside the house. The home is between middle class and working class, lower middle class you could say. I think the home is where so much happens; defining the home is very important to me from a design standpoint and from a human-heart standpoint. Each room is a different world. The little girl's room is where she can draw and create things at the table she had as a child. In the mother's room there's always a soap opera playing.

You seem to have found a great groove working with Jennifer Lawrence. How did you first come upon her?

I was aware of her from Winter's Bone, and she was the last person to audition for Silver Linings Playbook. There's something very ordinary and open about her, something very alive and unpretentious about her. Something magical. And she's also hard working, so to me that's it. We just have great chemistry.

When did you feel you finally started having the freedom and, more importantly, the control, to make the type of films you wanted?

These are all stories I wanted to tell. You have to earn it every time. It's not easy to tell a good story, period. You need to find a story that has a lot of dimension, heart, and imagination in it. And very, very specific characters. That means everything to me.

We live in a world of sequels, and many of your characters feel like they could carry another story by themselves. Is that something you would be interested in, revisiting a new story with a previous character?

I do feel that I could. I like to create a whole story for each of my characters, and sometimes there's much more than we could ever use. I do feel I could take older characters and make movies out of them.

Which characters come to mind?

The Richie DiMaso character from American Hustle [played by Bradley Cooper]. Or the Rosalyn [Jennifer Lawrence] character from that movie. Those are two that spring to mind. In this one I can also imagine Joy going from middle age to death. That would be interesting to me, getting to know her as an adult. But those are just speculative questions.