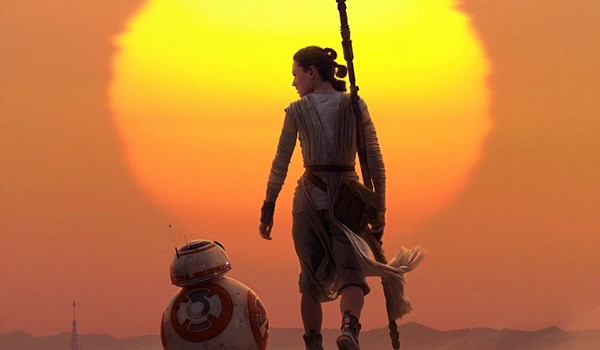 IMAX grosses were responsible for an estimated $19.0 million of this weekend's overall gross for Star Wars: The Force Awakens and have totaled $70 million to date domestically.

In other box office news, Paramount's Daddy's Home was off to a terrific second place start with an estimated $38.80 million. The PG-13 rated comedy starring Will Ferrell and Mark Wahlberg surged past expectations and opened 9 percent ahead of the $35.54 million start of The Other Guys. Pre-release online activity had been soft for Daddy's Home, but the film ultimately became the main Christmas alternative to The Force Awakens this weekend. Comedies aimed at family audiences have a history of surprising over Christmas weekend, as Daddy's Home joins a list that also includes 2012's Parental Guidance, 2008's Marley and Me, 2006's Night at the Museum and 2003's Cheaper By the Dozen.

Daddy's Home was quite front-loaded towards Christmas Day this weekend. The film took in $15.73 million on Christmas, fell 16 percent on Saturday to gross $13.18 million and is estimated to decline 25 percent on Sunday to gross $9.89 million. That places the film's estimated opening weekend to Friday ratio at 2.47 to 1. Daddy's Home received a solid B+ rating on CinemaScore, which suggests that the film is going over better with moviegoers than it has with critics.

Fox's Joy debuted in third place with an estimated $17.50 million. The David O. Russell directed film starring Jennifer Lawrence opened in line with expectations. Joy opened just 8 percent below the $19.11 million debut of 2013's American Hustle, but is likely to be significantly more front-loaded than American Hustle was due in part to mixed critical reviews and in part to being viewed as an outsider for a Best Picture nomination. Joy launched with $6.85 million on Christmas, declined 14 percent on Saturday to gross $5.92 million and is estimated to fall 20 percent on Sunday to gross $4.74 million. That gives the film an estimated opening weekend to Friday ratio of 2.55 to 1. Like Daddy's Home, Joy also received a solid B+ rating on CinemaScore.

Sony's Concussion debuted in sixth with an estimated $11.0 million. The Will Smith led sports drama opened towards the lower end of expectations and 26 percent below the $14.85 million debut of 2008's Seven Pounds. Despite concussions in the NFL being a very current topic among sports fans, Concussion ultimately couldn't compete with the competition from The Force Awakens and Daddy's Home this weekend. Concussion opened with $4.28 million on Friday, fell 10.5 percent on Saturday to gross $3.83 million and is estimated to fall 24.5 percent on Sunday to take in $2.89 million. That gives the film an estimated opening weekend to Friday ratio of 2.57 to 1. On a positive note, Concussion received an A rating on CinemaScore, which made it the highest rated of the weekend's five new wide releases on CinemaScore.

Paramount's The Big Short followed closely behind in seventh place with an estimated $10.52 million. The critically acclaimed Adam McKay directed film opened towards the lower end of expectations and was off to a promising start with its award season potential, Wednesday expansion and modest location count of 1,585 in mind. The film's weekend performance was quite similar to the $11.27 million Up in the Air grossed during its first weekend of wide release over Christmas weekend back in 2009. The Big Short earned an additional $4.02 million on Wednesday and Thursday, which places the film's five-day to three-day ratio at 1.38 to 1. The Big Short has grossed $16.01 million in 17 days and is scheduled to receive another expansion on January 8 (when the film will be playing in an estimated 2,500 locations). The Big Short received a healthy A- rating on CinemaScore.

Point Break landed in eighth place with an estimated $10.22 million. The pricey 3D action remake from Warner Bros. debuted towards the lower end of its already modest expectations and performed poorly with its price tag in mind. Point Break represents another poor recent performer for Warner Bros., as it joins the likes of Pan, Our Brand is Crisis, The 33 and In the Heart of the Sea over the past few months. Point Break opened with $4.13 million on Friday, fell 20 percent on Saturday to gross $3.29 million and is estimated to decline 15 percent on Sunday to gross $2.81 million. That places the film's estimated opening weekend to Friday ratio at a front-loaded 2.47 to 1. Point Break received a B rating on CinemaScore, which represented the softest CinemaScore rating among the weekend's five new wide releases.

Meanwhile, The Weinstein Company's The Hateful Eight was off to a very impressive start with an estimated $4.54 million from its 100 location 70mm roadshow launch. That gave the extended version of the Quentin Tarantino directed western a terrific per-location average of $45,366 for the frame and placed the film in eleventh among all films this weekend. Given the strength of this weekend's performance, The Hateful Eight looks to be in very good shape for its expansion into wide release this coming Thursday (when the film will be playing in an estimated 1,800 locations).

Disney reports this morning that Star Wars: The Force Awakens added $49.344 million on Christmas Friday, making it by far the largest Christmas Day gross in history (soaring past Sherlock Holmes' $24.6 million opening day in 2009). That figure also stands as the 20th best Friday gross in history, and the new record Friday gross for a non-opening day.

With the Christmas Day haul, The Force Awakens has now amassed a stunning $440.4 million domestically through just 8 days of release. The film topped Jurassic World's previous record of 10 days for fastest to cross the $400 million threshold, and it now sits at #11 on the all-time domestic lifetime gross chart -- between Shrek 2 ($441.3 million) and E.T. ($435.1 million). At its current rate, Force will push its way into the all-time top five on Sunday when it will likely surpass the final lifetime gross of The Dark Knight ($534.9 million).

Although the 79 percent Friday increase from Thursday wasn't quite as strong as Avatar's 107 percent on Christmas Day six years ago (which also fell on a Friday), the trends overall continue to generally line up close enough that a similar weekend multiplier could play out. We're projecting The Force Awakens will take in a sophomore weekend gross of $161 million -- blowing far past Jurassic World's second weekend record of $106.6 million, and even falling line with the actual opening weekends of mega blockbusters like The Dark Knight Rises ($160.9 million), The Dark Knight ($158.4 million), and The Hunger Games: Catching Fire ($158.1 million).

Among the slew of new releases hitting theaters this weekend, Daddy's Home stood out the most with an excellent $15.7 million opening day on Friday. The combination of Will Ferrell and Mark Wahlberg has proven successful once again following their 2010 hit, The Other Guys, and is serving as strong counter-programming to the Star Wars juggernaut. BoxOffice projects the comedy will land around $44 million for its opening weekend, far above industry expectations pre-release.

Opening in limited release this weekend, The Hateful Eight scored $1.905 million from 100 locations showcasing the 70MM Roadshow cut of Quentin Tarantino's newest film. That's an excellent per-theater average of $19,050 and sets the film on a course for a weekend around $4.8 million. That figure could go higher if more than fans of Tarantino and 70MM film turn out after opening day. The film expands nationwide on December 31.

Not to be overlooked in platform release this weekend is The Revenant, which bowed to $171,758 in 4 theaters on Friday and a per-theater average of $42,940. Looking to nab around $460,000 for the weekend, this is an excellent start for the film ahead of its January 8 wide expansion as major awards buzz continues to build in its favor (particularly for star Leonardo DiCaprio).

A full weekend report breaking down the other new releases will follow later in the weekend and on Monday when actuals are reported.