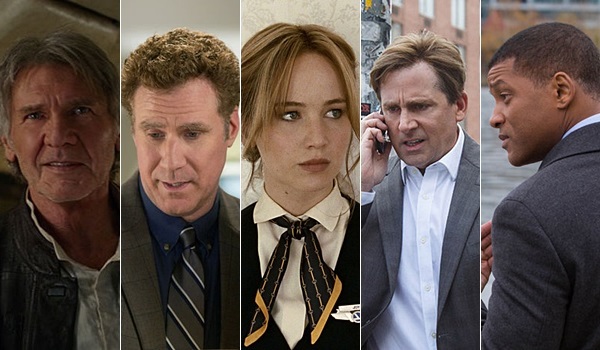 In other box office news, Paramount's Daddy's Home was off to a terrific second place start with $38.74 million. The PG-13 rated comedy starring Will Ferrell and Mark Wahlberg surged past expectations and opened 9 percent ahead of the $35.54 million start of 2010's The Other Guys. Pre-release online activity had been soft for Daddy's Home, but the film ultimately became the main Christmas alternative to The Force Awakens this weekend. Comedies aimed at family audiences have a history of surprising over Christmas weekend, as Daddy's Home joins a list that also includes 2012's Parental Guidance, 2008's Marley and Me, 2006's Night at the Museum and 2003's Cheaper By the Dozen.

Daddy's Home was quite front-loaded towards Christmas Day this weekend. The film took in $15.71 million on Christmas, fell 16 percent on Saturday to gross $13.13 million and declined 25 percent on Sunday to gross $9.90 million. That placed the film's opening weekend to Friday ratio at 2.47 to 1. Daddy's Home received a solid B+ rating on CinemaScore, which suggests that the film is going over better with moviegoers than it has with critics.

Fox's Joy debuted in third place with $17.02 million. The David O. Russell directed film starring Jennifer Lawrence opened in line with expectations. Joy opened 11 percent below the $19.11 million debut of 2013's American Hustle, but is likely to be significantly more front-loaded than American Hustle was due in part to mixed critical reviews and in part to being viewed as an outsider for a Best Picture nomination. Joy launched with $6.90 million on Christmas, declined 13 percent on Saturday to gross $5.97 million and fell 31 percent on Sunday to gross $4.74 million. That gave the film a front-loaded opening weekend to Friday ratio of 2.47 to 1. Like Daddy's Home, Joy also received a solid B+ rating on CinemaScore.

Paramount's The Big Short took in $10.53 million in its first weekend of wide release. The critically acclaimed Adam McKay directed film opened towards the lower end of expectations and had a promising performance with its award season potential, Wednesday expansion and modest location count of 1,585 in mind. The film's weekend performance was quite similar to the $11.27 million Up in the Air grossed during its first weekend of wide release over Christmas weekend back in 2009. The Big Short earned an additional $4.02 million on Wednesday and Thursday, which places the film's five-day to three-day ratio at 1.38 to 1. The Big Short has grossed $16.02 million in 17 days and is scheduled to receive another expansion on January 8 (when the film will be playing in an estimated 2,500 locations). The Big Short received a healthy A- rating on CinemaScore.

Sony's Concussion followed closely behind with an estimated $10.50 million. The Will Smith led sports drama opened towards the lower end of expectations and 29 percent below the $14.85 million debut of 2008's Seven Pounds. Despite concussions in the NFL being a very current topic among sports fans, Concussion ultimately couldn't compete with the competition from The Force Awakens and Daddy's Home this weekend. Concussion opened with $4.27 million on Friday, declined 11 percent on Saturday to gross $3.80 million and fell 36 percent on Sunday to take in $2.43 million. That gave the film a front-loaded opening weekend to Friday ratio of 2.46 to 1. On a positive note, Concussion received an A rating on CinemaScore, which made it the highest rated of the weekend's five new wide releases on CinemaScore.

Point Break landed in eighth place with an estimated $9.81 million. The pricey action remake from Warner Bros. debuted on the lower end of its already modest expectations and performed poorly with its price tag in mind. Point Break represents another poor recent performer for Warner Bros., as it joins the likes of Pan, Our Brand is Crisis, The 33 and In the Heart of the Sea over the past few months. Point Break opened with $4.14 million on Friday, fell 20 percent on Saturday to gross $3.30 million and declined 28 percent on Sunday to gross $2.37 million. That placed the film's opening weekend to Friday ratio at an especially front-loaded 2.37 to 1. Point Break received a B rating on CinemaScore, which represented the softest CinemaScore rating among the weekend's five new wide releases.

Meanwhile, The Weinstein Company's The Hateful Eight was off to an impressive start with $4.61 million from its 100 location 70mm roadshow launch. That gave the extended version of the Quentin Tarantino directed western a terrific per-location average of $46,107 for the frame and placed the film in tenth place among all films this weekend. Given the strength of this weekend's performance, The Hateful Eight looks to be in very good shape for its expansion into wide release this coming Wednesday (when the film will be playing in an estimated 1,800 locations).