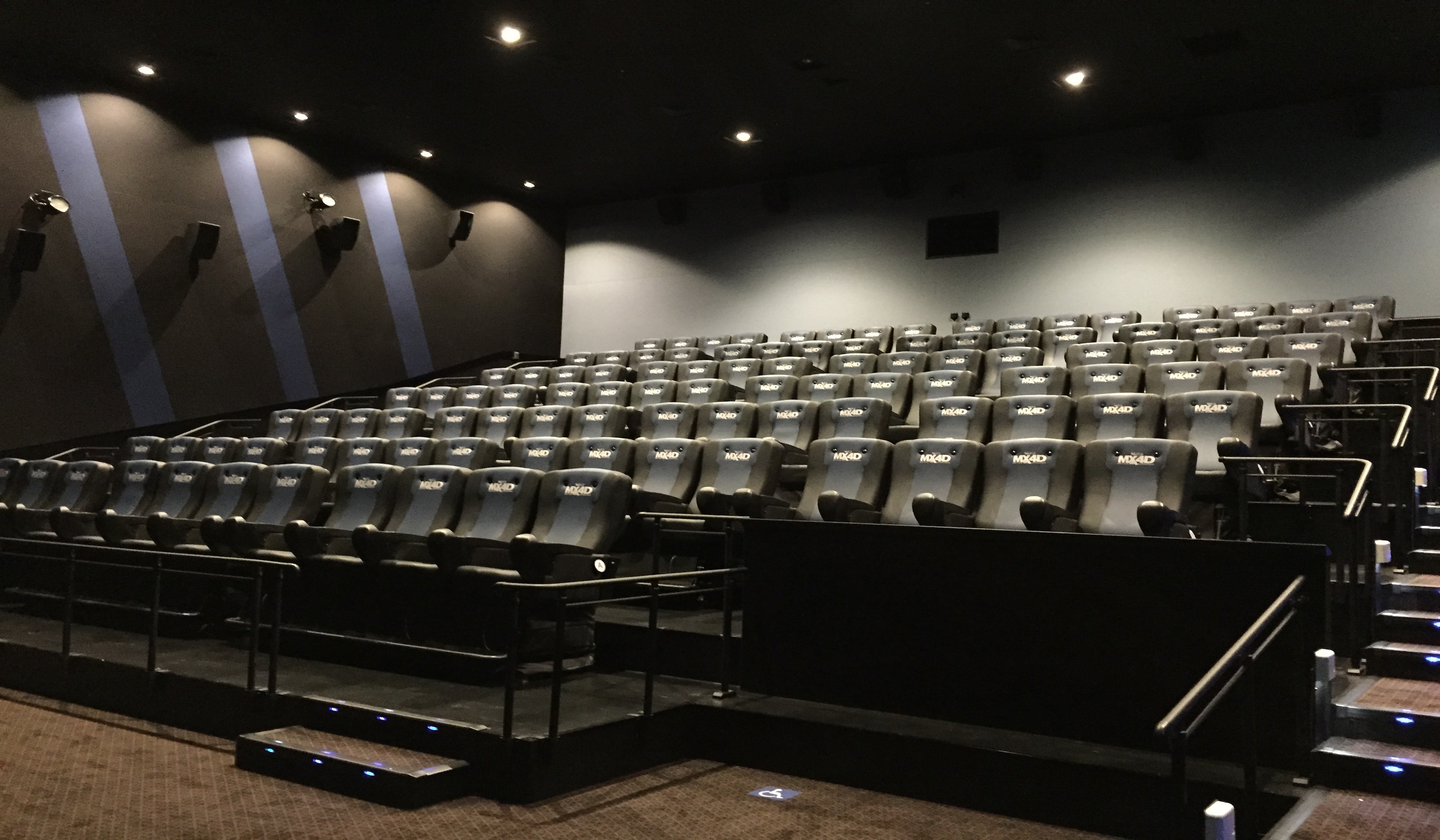 "To this day, I fondly remember driving a pickup truck with a 32-foot trailer hosting six motion chairs and a big projector," says Michel Paquette, vice president of marketing for D-BOX. "It is quite interesting to see the market reaction and development around this original novelty.

Things have changed considerably for immersive seating (also known as 4D) since its early days in 2009. A slew of hit titles, pioneering exhibitors, and ambitious companies have worked tirelessly over the past several years to educate the public and create a market around the concept. Like several other innovations to the cinema experience, much of the format's growth has been established overseas, particularly in Asia where demand has kept up with the opening of new theaters-China in particular. Chinese circuit Wanda Cinemas opened its first location with 4DX seats, the immersive seating option from South Korea's CJ 4DPLEX, in Dalian Ganghui last February before adding sites in Dalian Jingkai in August and a couple more in Dalian Gaoxin and Beijing's central business district in September. As of October, 4DX boasts 40 screens in China and plans to reach 53 by the end of the year-representing the largest single market for the company. Meditation, whose MX4D offering has also enjoyed numerous sales abroad, also has a presence in Wanda's Chinese circuit and expects to reach 20 locations in the market by year's end. China has been so important for MediaMation that the company recently opened a second manufacturing facility in China to better service the booming market.

Japan has been similarly enthusiastic about immersive seating. 4DX installed its first theater in the market in 2013; the company expects to finish the year with a total of 33 sites, 11 of which were added this year alone. MediaMation partnered with Sony as their exclusive reseller in Japan and has already outfitted a pair of locations for TOHO Cinemas with their MX4D seats, a figure they're expecting to rise to 9 or 10 by the end of the year.
The concept has also found success in Latin America, a region where MediaMation already has a footprint of 17 theaters with several more commitments scheduled for the coming months. MediaMation has worked with Mexican exhibitor Cinemex in providing immersive seating for 12 of the circuit's X4D locations with plans to add 10 sites in the future, something that is proving to become a marketing factor in its own right as Cinemex eyes an international expansion of its own. American Dream, a state-of-the-art shopping center in East Rutherford, New Jersey, scheduled to open in the late summer of 2017, will become the fourth Cinemex location in the U.S. and will include the chain's X4D offering as part of a 12-screen, 1,400-seat complex.

Dan Jamele, vice president and co-owner of MediaMation, cites IMAX as the model of how new cinema technologies can simultaneously market themselves to exhibitors and audiences alike. "We want to build the awareness of the MX4D brand in a more paced fashion, the way IMAX has successfully done by building the base to the proper market saturation without crowding out the field.

"The vast majority of the marketing is done by the studios, not the exhibitors, so in one sense, the idea of really marketing your theater location and what technology it offers is a newer concept," says Jamele. "However, just as with enhanced sound systems, PLF theaters, luxury seating, and new F&B options, the theaters are putting themselves out there to the general public, and that works well for us as we work with them to market the MX4D brand along with their other technologies."

The support of the creative community might prove to be the X factor to usher in a greater wave of interest from audiences, in the same way digital 3D and premium large format have benefited from films tailored to their respective formats. "Currently the 4D Motion and immersive environment hasn't seen any major productions particularly developed with that in mind," admits Jamele. "As the producers and directors become more aware of the options and experience, and as the rollout worldwide grows, we anticipate that will happen."

There are, however, certain types of films that work better for immersive seating than others; runaway hits like Jurassic World yielded 1.3 million admissions and a 54 percent occupancy rate worldwide for 4DX. "San Andreas was the disaster film that really exhibited how 4DX is a unique cinematic experience," adds Byung Hwan Choi, CEO of CJ 4DPLEX, who cites revenues two to three and a half times higher for that title when comparing 2D and 3D screenings.

U.S. exhibitors are taking note. D-BOX has developed working relationships with over 30 exhibition partners in the U.S. and Canada over the last several years, and MediaMation expects the United States to be a major growth market in 2016 as they prepare to open a location in Boston with National Amusements. 4DX opened its first theater in the United States at the Regal Cinemas L.A. LIVE location in June 2014. It hasn't taken Regal very long to become convinced of the concept's commercial viability; the world's top exhibition chain is already planning to add 4DX in two of its marquee New York City locations, Regal Union Square Stadium 14 and Regal E-Walk 13 in Times Square. "Because of strong performance from 4DX, we saw the Regal Cinema L.A. Live Stadium 14 jump in the ranks of U.S. theaters-this past year, the location skyrocketed from 94th to 39th and escalated from $10.3 million to $12.3 million in box office revenue in 2015," a 20 percent increase over the previous year, according to Choi. The fruitful partnership with Regal helped 4DX secure additional deals with leading U.S. exhibitors. Marcus Theatres already has plans to open its first 4DX location at Chicago's Marcus Gurnee Cinema.

Jim King, project manager at Sonic Equipment, notes that immersive-seating installations in the U.S. tend to be occurring around urban clusters. "In high- traffic theaters 4D can separate an exhibitor from the rest," he explains. "Large cities are finding big success with 4D. We have yet to see this take off in smaller areas, but we are constantly scanning the market to determine if 4D will work for many or all exhibitors."

Regardless of their location, immersive seating is poised for another growth year in 2016 as early adopters begin to see the format's influence on ticket sales. The big question, however, involves just how much investment exhibitors are willing to allocate to the concept at a time when the cinema-going experience seems to be improving from every angle. Motion Image Technology's Cine-Sation stands out as an enticing alternative for exhibitors preferring a less obtrusive installation and a more immediate return on investment. Pacific Theatres became the first exhibitor to commit to Cine-Sation, announcing an installation in its Chatswoth, California, location in December 2014.

"Now that theaters have finished their rollout and CapEx spending on digital and 3D, they are looking for the next level to improve the audience experience," says MediaMation's Jamele, citing the competition for investment with those formats as one of the early obstacles for immersive seating. That competition has now shifted to include other amenities such as luxury seating, immersive sound, and premium large format as theaters look to simultaneously enhance their theaters and bottom line. Jamele insists, however, that immersive seating has an edge when compared to other offerings. "It is perceived by the public as something completely different and definitely a noticeable upgrade to what they are used to. This allows it to command a much larger premium up charge than any of the competing offerings, and that is becoming very evident to both the exhibitors and the studios."

Long removed from his days on the road, D-BOX's Paquette agrees that immersive seating's full potential will begin to be realized in the coming years. What was once six motion chairs in the back of a pickup has grown to 410 screens across 30 countries. "We really believe that the major obstacles are behind us," he says. "As you try to create a market, you need to go through several phases, from the first studio to the first exhibitor that took that leap of faith, we have proven that the model can work and the future has never been brighter for us."