NORTH AMERICA: Weekend Estimates: 'Star Wars: The Force Awakens' Zooms Past $800M After Leading with $41.6M; 'The Revenant' Breaks Out with $38.0M Second Place Take; 'The Forest' Opens in Fourth with Solid $13.1M 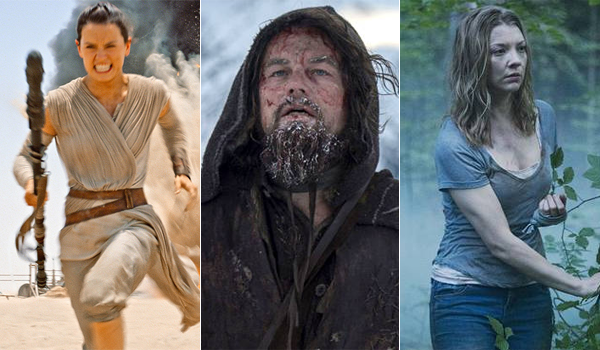 Sunday Update: Disney's Star Wars: The Force Awakens took in an estimated $41.63 million to lead the weekend box office for a fourth consecutive frame. The seventh chapter of the Star Wars franchise claimed the second largest fourth weekend gross of all-time; behind only the $50.31 million fourth weekend take of Avatar back in January of 2010. The Force Awakens was down a sharp 54 percent from last weekend, as the film having been seen by so many moviegoers, the end of the holidays and the added presence of The Revenant in the marketplace all took a toll this weekend.

In the bigger picture Star Wars: The Force Awakens passed the $800 million mark this weekend and continues to pad its total as the highest grossing film of all-time domestically with $812.01 million in 24 days of release. The Force Awakens is currently running 88.5 percent ahead of the $430.85 million 24-day take of Avatar and 46 percent ahead of the $556.54 million 24-day gross of last year's Jurassic World. When adjusting for ticket price inflation, Star Wars: The Force Awakens is now in twelfth place on the all-time adjusted domestic list, as the film moved past the lifetime adjusted grosses of Return of the Jedi, The Exorcist and The Empire Strikes Back this weekend.

Fox's The Revenant had a terrific expansion into wide release with an estimated second place take of $38.0 million. The Alejandro González Iñárritu directed western starring Leonardo DiCaprio exceeded its rising expectations and claimed the fifth largest January opening weekend of all-time (without adjusting for ticket price inflation). It was especially important for The Revenant to get off to a strong start this weekend with the film's expensive price tag in mind. The Revenant marks another strong performer for DiCaprio and opened just below the $41.06 million start of 2010's Shutter Island. This weekend's performance for The Revenant was just ahead of the $37.85 million debut of 2014's Lone Survivor and was an impressive 55.5 percent stronger than the $24.44 million Zero Dark Thirty took in its first weekend of wide release back in January of 2013.

The Revenant opened with an estimated $14.35 million on Friday (which included an estimated $2.3 million from Thursday evening shows), increased 6 percent on Saturday to take in $15.20 million and is estimated to fall 44 percent on Sunday to gross $8.45 million. That places the film's estimated opening weekend to Friday ratio at 2.65 to 1. After an additional two weeks of platform release, The Revenant has grossed $39.56 million in 17 days. The film received a solid B+ rating on CinemaScore and currently boasts a strong 87 percent audience score on Flixster. The Revenant will hope to hold up well going forward, thanks in part to its awards season buzz.

Paramount's Daddy's Home claimed third place with an estimated $15.0 million. The PG-13 rated comedy starring Will Ferrell and Mark Wahlberg was down a sizable 49 percent from last weekend, as the end of the holiday season and the stronger than expected performance of The Revenant affected holdovers in general this weekend. Even with the decline this weekend, Daddy's Home continues to impress with a stronger than expected 17-day take of $116.31 million. That places the film 32 percent ahead of the $88.25 million 17-day take of 2010's The Other Guys (which fell 42 percent in its third weekend to gross $10.16 million).

The Forest debuted in fourth place this weekend with an estimated $13.09 million. The PG-13 horror film from Focus and Gramercy starring Natalie Dormer exceeded pre-release expectations and was off to a solid start with its modest $10 million reported production budget it mind. January tends to be a good month to open horror films and that trend continued this weekend for The Forest. The film opened 13 percent below the $15.03 million start of last year's The Woman in Black 2: Angel of Death, but going forward likely won't be quite as front-loaded as that film was.

The Forest launched with $4.98 million on Friday (which included an estimated $0.52 million from Thursday evening shows) and had an estimated opening weekend to Friday ratio of 2.63 to 1. The Forest received a C rating on CinemaScore, which is respectable for a horror film. On the other hand, the film has received a soft 34 percent audience score on Flixster. Regardless of word of mouth, The Forest should be front-loaded given its genre and the upcoming direct competition from STX Entertainment's The Boy beginning on January 22.

Sisters rounded out the weekend's top five with an estimated $7.17 million. Universal's R-rated comedy starring Tina Fey and Amy Poehler declined 44 percent, which represented one of the weekend's stronger percentage holds among wide releases. Sisters continues to impress with a 24-day gross of $73.88 million. That already gives the film a total gross to opening weekend ratio of 5.31 to 1. Sisters is currently running 20 percent ahead of the $61.44 million 24-day gross of 2012's This Is 40.

Saturday Update: Launching into wide release yesterday was Fox's The Revenant, and early returns are excellent as it's the first movie to unseat Star Wars: The Force Awakens from first place on the daily chart. The strongly buzzed-about film from Oscar-winning Birdman director Alejandro González Iñárritu earned an estimated $14.4 million on Friday following an excellent $1.56 million two-week platform in four theaters. That's on par with 2014's Lone Survivor, which also pulled a $14.4 million opening day in wide release after a strong limited run over the holidays. Revenant did earn a bit more of its cash on Thursday night compared to that film ($2.3 million versus $1.5 million), so it's possible the weekend will be slightly more front-loaded for Revenant. That said, continuing awards buzz, raves for Leonardo DiCaprio's master performance, very positive word of mouth (87 percent on Flixster) and reviews (81 percent on Rotten Tomatoes), and the big screen scope of the film are expected to drive it in the long run. Look for a weekend around $36.5 million (which should put it behind Star Wars for the overall frame) and healthy legs thereafter.

Disney reports that Star Wars: The Force Awakens earned another $10.76 million in second place on Friday, bringing its record-breaking North American total up to $781.14 million through 22 days of release. The blockbuster phenom was off around 68 percent from New Year's Day last Friday, continuing to follow the day-to-day pattern of The Lord of the Rings: The Return of the King a bit more closely (it dropped 65 percent from Friday, January 2 to January 9, 2004). On track to become the first film in history to topple the $800 million domestic benchmark sometime on Sunday, The Force Awakens is eyeing a fourth straight weekend first place finish with around $41 million.

The Forest debuted with a decent $4.975 million opening on Friday, generally matching pre-release expectations. The film, reportedly shot for around $10 million, isn't generating positive buzz though with weak scores of 37 percent on Flixster and 13 percent among RT critics. An overall opening weekend around $11.9 million.

Meanwhile, Daddy's Home tacked on another $4.2 million yesterday for a new total of $105.5 million as it eyes a $14.2 million weekend. Sisters rounded out the top five with $2.26 million on Friday, bringing its take up to $69.97 million as it heads toward $7.2 million this weekend.

DiCaprio has a recent history of leading films that exceed expectations in wide release (if not outright over-perform). His villainous turn in Django Unchained was a significant drawing factor for the Quentin Tarantino film three years ago. A few months later, he drove Baz Luhrmann's The Great Gatsby well beyond pre-release box office predictions.

It seems unlikely that Revenant will follow the Thursday night-to-weekend multiplier of Lone Survivor (which bagged a $37.85 million wide opening weekend after also playing in limited release). However, last year's American Sniper earned more than 16 times its Thursday night wide release ($5.3 million) over the course of its three-day expanded opening weekend ($89.3 million). A similar pattern for Revenant would translate to over $38 million this weekend.

It's possible Revenant could end up even more front-loaded depending on how well play the atmospheric film plays with casual moviegoers in its early hours of release, but the selling power of DiCaprio, an Oscar-winning director, awards buzz, and Tom Hardy in a supporting role has us confident in a strong run ahead.

For now, we're projecting the film will score $35 million this weekend with potential to go higher. That would land it in a strong second place showing behind the presumed four-peat of Star Wars: The Force Awakens, which is aiming for another weekend close to $50 million.

Follow BoxOffice for more weekend updates beginning Saturday morning with weekend projections based on official Friday estimates from the studios.