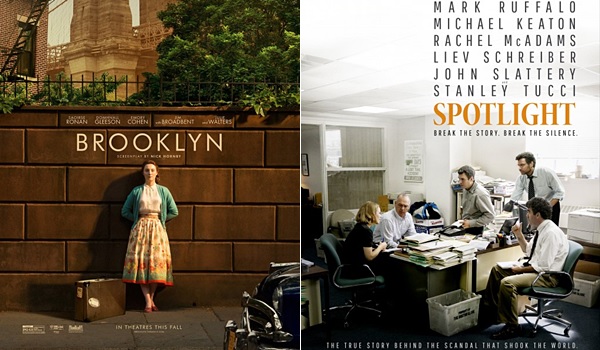 Upon adding 393 locations, Brooklyn took in an estimated $1.66 million for the three-day frame. The John Crowley directed film starring Saoirse Ronan was up 57 percent from last weekend and registered a per-location average of $2,416 for the frame (from 687 locations). Brooklyn has grossed $24.61 million through 73 days of release. BoxOffice estimates that Brooklyn will take in $2.00 million over the four-day weekend.

Spotlight grossed an estimated $1.55 million over the three-day weekend. Upon expanding into an additional 617 locations, The Tom McCarthy directed film starring Michael Keaton and Mark Ruffalo was up 67 percent over last weekend. However, Spotlight had a modest per-location average of $1,574 (from 985 locations) for the frame. The 73-day total for Spotlight stands at $30.52 million. Open Road's current four-day estimate for Spotlight is $1.90 million.

Room took in an estimated three-day gross of $700,000 from 293 locations (for a per-location average of $2,389). The Lenny Abrahamson directed film starring Brie Larson was up a very strong 504 percent over last weekend (when the film was playing in 205 fewer locations). Room has grossed $5.97 million in 94 days and will look to continue to build momentum going forward thanks in part to its four Academy Award nominations. A24's current four-day estimate for Room is $893,357.

While it didn't receive a Best Picture nomination among its six Academy Award nominations, The Weinstein Company's Carol still held up reasonably well with an estimated three-day take of $1.38 million. The Todd Haynes directed romantic drama starring Cate Blanchett and Rooney Mara was down 7 percent from last weekend upon expanding into an additional 265 locations this weekend. Carol has grossed $9.08 million in 59 days. BoxOffice estimates that Carol will take in $1.65 million for the four-day weekend.

Paramount's Anomalisa took in an estimated $290,000 from 37 locations. That gave the stop motion animated film directed by Charlie Kaufman and Duke Johnson a per-location average of $7,838 and represented a 34 percent increase over last weekend (when the film was playing in 17 locations). The Academy Award nominee for Best Animated Feature has grossed $864,990 through 19 days of platform release. Paramount's four-day estimate for Anomalisa is $345,000.

Estimated three-day weekend grosses for other films that received at least one major Academy Award nomination included $649,000 for Focus' The Danish Girl from 479 locations and $100,029 for IFC Films' 45 Years from just 14 locations. Respective total grosses stand at $8.69 million for The Danish Girl in 52 days and at $474,810 for 45 Years in 26 days.

Sony Pictures Classics' The Lady in the Van registered an estimated three-day take of $72,264 from four locations in New York and Los Angeles. That gave the Nicholas Hytner directed film starring Maggie Smith a very solid per-location average of $18,066. With the addition of a one-week Oscar qualifying run back in early December, The Lady in the Van has grossed $119,936 to date. The Lady in the Van currently boasts a strong 93 percent Tomatometer on Rotten Tomatoes.