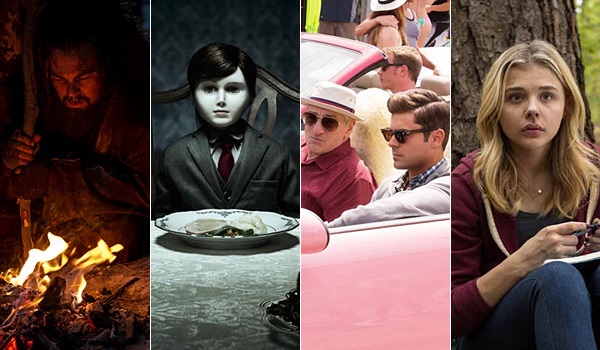 Sunday Update: After finishing in a close second place each of the past two weekends, Fox's The Revenant moved into first place this weekend with an estimated $16.0 million. The Alejandro González Iñárritu directed western starring Leonardo DiCaprio was down a sizable 50 percent from last weekend, as the box office in general was slowed by Winter Storm Jonas hitting the East Coast. Today's NFL Conference Championship Games are also expected to negatively impact Sunday's grosses as well. Even with this week's slowing, The Revenant continues to impress with $119.19 million after 17 days of wide release (and an additional two weeks of platform release). The film is currently running 24.5 percent ahead of the $95.75 million 17-day gross of 2010's Shutter Island (which fell 42 percent in its third weekend to take in $13.23 million). The Revenant is likely to stabilize next weekend thanks in part to healthy word of mouth and the continued buzz around the film's 12 Academy Award nominations.

Disney's Star Wars: The Force Awakens was up one spot from last weekend to claim second place with an estimated $14.26 million. The seventh chapter of the Star Wars franchise was down a respectable 46 percent from last weekend. Without adjusting for ticket price inflation, The Force Awakens claimed the eighth largest sixth weekend gross on record. The Force Awakens continues to pad its total as the highest grossing film of all-time domestically with $879.29 million through 38 days of release. That leaves the film just $20.71 million away from becoming the first ever the reach the $900 million domestic mark. Star Wars: The Force Awakens is currently running 59 percent ahead of the $551.74 million 38-day take of 2009's Avatar and 44 percent ahead of the $611.23 million 38-day gross of last year's Jurassic World.

Universal's Ride Along 2 was down two spots and a sharp 63 percent from last weekend to land in third with an estimated $12.96 million. The PG-13 rated comedy sequel starring Ice Cube and Kevin Hart held up much worse in its second weekend than 2014's Ride Along, which declined 49 percent to take in $21.30 million. Clearly word of mouth isn't as strong for Ride Along 2 as it was for Ride Along, though this weekend's winter storm obviously had an effect on this weekend's hold as well. Ride Along 2 has grossed $59.11 million in ten days. While that's solid with the film's price tag in mind, it's below expectations and places the film 22 percent behind the $75.54 million ten-day start of Ride Along.

As had been expected, this weekend's three new wide releases were fairly bunched together with one another.  With estimates for the three films being separated by just $825,000, it's possible that final rankings for the three could change when tomorrow's weekend actuals are released.

Dirty Grandpa opened in fourth place with an estimated $11.53 million. The R-rated comedy from Lionsgate starring Robert De Niro and Zac Efron performed towards the lower end of pre-release expectations. Dirty Grandpa opened 29 percent below the $16.33 million start of 2013's Last Vegas and going forward is unlikely to hold up as well as that film did. Poor critical reviews and Sunday's NFL Conference Championship Games (as well as more natural back-loading) appear to have had more of an effect on Dirty Grandpa this weekend than they did on The Boy and The 5th Wave.

Dirty Grandpa opened with $4.25 million on Friday (which included an estimated $660,000 from Thursday night shows), was up 8 percent on Saturday to take in $4.58 million and is estimated to decline 41 percent on Sunday to gross $2.70 million. That gives the film an estimated opening weekend to Friday ratio of 2.71 to 1. Dirty Grandpa received a respectable B rating on CinemaScore, which suggests that the film is going over better with moviegoers than it has with critics. At the same time, the film's 51 percent audience score on Flixster is a concerning early sign going forward.

STX Entertainment's The Boy debuted in fifth place with an estimated $11.26 million. The low-budget PG-13 rated horror film starring Lauren Cohan opened in line with expectations and was off to a solid start with its reported $10 million production budget in mind. The Boy opened 12 percent below the recent $12.74 million start of Focus' The Forest and was at a bit of a disadvantage as a result of arriving in the marketplace just two weeks after The Forest.

The Boy held up well throughout the weekend, especially with its genre and the weekend weather in mind. The film opened with $3.90 million on Friday (which didn't include any Thursday night shows), increased 18 percent on Saturday to take in $4.60 million and is estimated to fall 40 percent on Sunday to gross $2.76 million. That places the film's estimated opening weekend to Friday ratio at 2.89 to 1. The Boy received a B- rating on CinemaScore, which is respectable with the film's genre in mind, but also has a lackluster current audience score of 53 percent on Flixster.

Sony's The 5th Wave was off to an estimated sixth place start of $10.70 million. The young adult adaptation starring Chloë Grace Moretz opened in line with expectations. The 5th Wave debuted 32 percent below the $15.68 million start of 2014's If I Stay. The 5th Wave started with $3.50 million on Friday (which included an estimated $475,000 from Thursday night shows), was up a healthy 29 percent on Saturday to take in $4.53 million and is estimated to fall 41 percent on Sunday to gross $2.67 million. That places the film's estimated opening weekend to Friday ratio at 3.06 to 1. The 5th Wave received a modest B- rating on CinemaScore and currently has a soft audience score of 51 percent on Flixster. It should be noted that the film is performing stronger overseas than it is domestically.

Meanwhile, 13 Hours: The Secret Soldiers of Benghazi followed closely behind in seventh place with an estimated $9.75 million. The Michael Bay directed action thriller from Paramount was down a solid 40 percent from last weekend, which represented one of the weekend's better holds among wide releases. 13 Hours was helped out this weekend by healthy word of mouth and by expanding into 528 additional locations (which included an expansion into Canada). 13 Hours has grossed $33.48 million in ten days. That is a bit below expectations and places the film 26 percent behind the $45.11 million ten-day take of 2012's Act of Valor (which fell 44.5 percent in its second weekend to gross $13.57 million).

Saturday Update: Please note that projected weekend estimates will be affected by the major winter storm hitting the east coast this weekend, as well as Sunday's NFL playoffs. Updated estimates from the studios will be reported on Sunday.

Fox reports this morning that The Revenant claimed first place again on Friday with an estimated $4.55 million, off 51 percent from the same day last week. That brings the 12-time Oscar nominated film up to $107.7 million domestically as it continues to enjoy strong momentum and healthy word of mouth. BoxOffice projects a weekend finish around $16.2 million in first place.

The Boy posted a solid debut on Friday with $3.9 million in third place, all of which came from "Friday proper" since STX did not screen the film on Thursday night. While critics (25 percent) haven't taken to the horror pic, audiences are a bit more positive about it with a modest 60 percent score as of this morning. Projections are particularly tricky for this title given the circumstances, but it should land around $10 million for the opening weekend.

Ride Along 2 claimed $3.7 million in fourth place yesterday, down 69 percent from opening day last week. With $49.85 million in the bank so far, the film continues to lose pace off its predecessor but will ultimately still prove a financial success for Universal. BoxOffice projects a $12.3 million sophomore weekend.

Star Wars: The Force Awakens temporarily moved down to fifth place on Friday with $3.52 million, bringing its all-time domestic record haul up to $868.55 million. BoxOffice projects a $14.3 million weekend overall, which should score the blockbuster phenom a second place finish this weekend (up from third last weekend).

Debuting in sixth place on Friday, The 5th Wave mustered just $3.5 million (including Thursday earnings). Unfortunately, that falls significantly shy (about 49 percent) of Chloe Moretz's previous young adult adaptation, If I Stay, which pulled $6.83 million on opening day in August 2014. Marketing had been underwhelming, and the young adult phase has been trending downward over the past year, so this opening isn't entirely surprising. Still, with weak reviews (19 percent) and word of mouth (49 percent), we don't expect much in the way of legs. BoxOffice is projecting an $8.9 million opening weekend. Sony does note, however, that the pic is projected to sit close to $35 million worldwide by the end of Sunday with another 30 percent of its territories left to open. The production budget for the movie was a reasonable $38 million.

Friday Update: Sources report that Dirty Grandpa bowed to an estimated $660,000 from over 2,000 locations on Thursday night. That compares very favorably to fellow Zac Efron-led comedy That Awkward Moment's mere $250,000 Thursday night launch two years ago this month, as well as the $250,000 debut of Unfinished Business last March. The film, co-starring Robert de Niro, could find an opening weekend in the low-to-mid teen millions, although outside factors this weekend could prevent that (detailed below).

The 5th Wave also launched last night in a reported 2,297 theaters to the tune of $475,000. Unfortunately, that falls well short of If I Stay's $1.1 million Thursday night opening in late August 2014, as well as the $1.1 million start of the original Maze Runner in September of that same year.

The Boy did not receive any Thursday night screenings.

Of note this weekend is the fact that a major winter storm is currently making its way across the east coast and could affect major metropolitan areas depending on where exactly it lands. This is likely to have some small effect on the box office, as will this weekend's NFL championship games. As a result, grosses for the openers (and possibly some holdovers) are likely to come in below pre-weekend expectations. The Revenant, Star Wars: The Force Awakens, and Ride Along 2 are likely to repeat as the top three films.

Early weekend estimates based on official Friday estimates from the studios will be posted on Saturday morning.