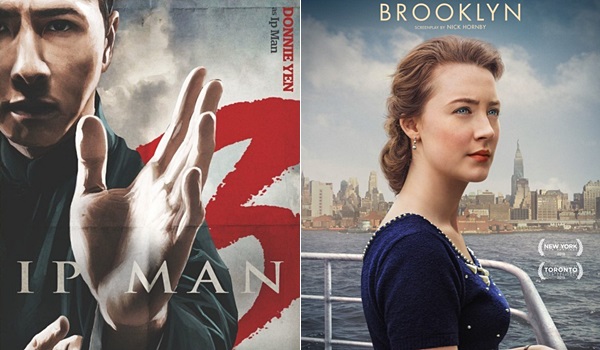 Well Go USA's Ip Man 3 was off to an impressive start this weekend with an estimated $762,400 from 103 locations. That gave the third installment of the Donnie Yen led martial arts series a healthy per-location average of $7,402 for the frame. It should also be noted that the film's performance on Saturday was affected by Winter Storm Jonas on the East Coast. Ip Man 3 has already easily out-grossed the $205,675 total North America gross of 2011's Ip Man 2: Legend of the Grandmaster. Ip Man 2 opened with $61,057 from 20 locations (for a per-location average of $3,053). Ip Man 3 has received good critical reviews, as it currently boasts an 83 percent Tomatometer on Rotten Tomatoes. Well Go USA will be expanding the film into additional markets next weekend.

Fox Searchlight's Brooklyn took in an estimated $1.68 million from 962 locations, for a per-location average of $1,741. The John Crowley directed Best Picture nominee starring Saoirse Ronan was down a slim 7 percent from last weekend upon expanding into an additional 275 locations this weekend. The 80-day total gross for Brooklyn stands at $27.54 million.

Fellow Best Picture nominee Room performed similarly with an estimated $1.43 million from 884 locations, for a per-location average of $1,612. Upon expanding into an additional 591 locations, A24's Room was up a strong 88 percent over last weekend's performance. The Lenny Abrahamson directed film starring Brie Larson has grossed $7.95 million in 101 days and should continue to benefit from its four Academy Award nominations going forward.

Open Road's Spotlight grossed an estimated $1.38 million from 1,030 locations. That represented a 17 percent decline from the previous frame (when the film was playing in 45 fewer locations) and gave Spotlight a per-location average of $1,337. The Tom McCarthy directed Best Picture nominee starring Michael Keaton and Mark Ruffalo has grossed $33.01 million in 80 days.

Upon expanding into 26 new locations this weekend, 45 Years took in an estimated $220,000 from 40 locations. The critically acclaimed drama from IFC Films' Sundance Selects division, starring Charlotte Rampling and Tom Courtenay was up 129 percent over last weekend. 45 Years had a per-location average of $5,500 for the frame, which was solid, especially with this weekend's weather on the East Coast in mind. 45 Years has grossed $740,409 in 33 days and will receive a significant expansion next weekend.

Sony Pictures Classics' The Lady in the Van took in an estimated $187,026 from 30 locations, for a solid per-location average of $6,234. The critically acclaimed Nicholas Hytner directed film starring Maggie Smith was up a strong 204 percent upon expanding into 26 new locations this weekend. The Lady in the Van has grossed $329,455 after ten days of release (and an additional one-week Oscar qualifying run back in early December).

Paramount's Anomalisa took in an estimated $375,000 from 143 locations, for a per-location average of $2,622. The stop motion animated film directed by Charlie Kaufman and Duke Johnson didn't maintain momentum all that well this weekend, as it was up a modest 23 percent upon expanding into an additional 106 locations. The 26-day platform total for Anomalisa stands at $1.41 million.

The Weinstein Company's Carol and Focus' The Danish Girl took in respective estimated weekend grosses of $639,000 and $531,000. Carol was down a troubling 56 percent from last weekend upon losing 98 locations, while The Danish Girl fell 26 percent upon adding 315 new locations. Respective total grosses stand at $10.57 million for Carol in 66 days and at $9.72 million for The Danish Girl in 59 days. Both films have clearly lost significant momentum as a result of not receiving Best Picture nominations.