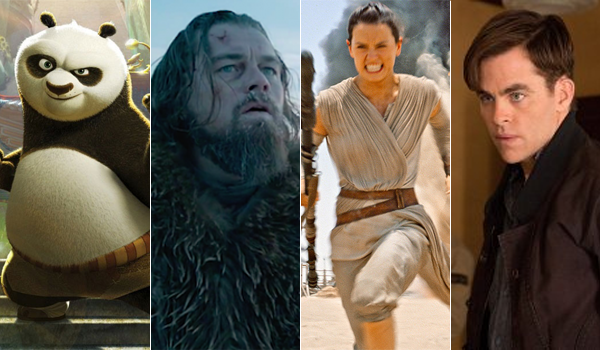 Kung Fu Panda 3 took in $1.75M on Monday to lead the daily box office for a fourth consecutive day. The 3D computer animated sequel from Fox and DreamWorks Animation declined 86 percent from Sunday's performance. Kung Fu Panda 3 has grossed $43.03 million in four days of release. The film is running a bit below expectations and 15 percent behind the $50.80 million four-day start of last year's Hotel Transylvania 2 (which fell 84 percent on its first Monday to gross $2.34 million). With no new family films going into wide release during the month of February, Kung Fu Panda 3 will have a strong chance of holding up well going forward.

Fellow Fox release The Revenant placed in second with $0.961 million. The Alejandro González Iñárritu directed western starring Leonardo DiCaprio was down 74 percent from Sunday and down a solid 35 percent from last Monday. The Revenant continues to exceed expectations with $139.51 million after 25 days of wide release (and an additional two weeks of platform release). The film is currently running an impressive 28 percent ahead of the $108.81 million 25-day take of 2010's Shutter Island.

Disney's Star Wars: The Force Awakens claimed third place with $0.781 million. The seventh chapter of the Star Wars franchise fell 78 percent from Sunday and 40 percent from last Monday. With a record-breaking 46-day gross of $896.54 million, Star Wars: The Force Awakens is now just $3.46 million away from becoming the first film ever to reach the $900 million unadjusted domestic mark.

Fellow Disney release The Finest Hours followed closely behind in fourth with $0.761 million. The 3D action drama starring Chris Pine was down 71 percent from Sunday. The Finest Hours has grossed $11.05 million in four days. While that is towards the higher end of the film's modest expectations, The Finest Hours is performing softly with its price tag in mind. The Finest Hours is running 9 percent behind the recent $12.11 million four-day start of In the Heart of the Sea.

Meanwhile, Open Road's Fifty Shades of Black continued to disappoint with a tenth place take of $0.368 million. The Marlon Wayans led R-rated comedy was down 71 percent from Sunday. Fifty Shades of Black has grossed just $6.27 million in four days. The film is running a very underwhelming 34 percent behind the $9.51 million four-day start of 2014's A Haunted House 2.