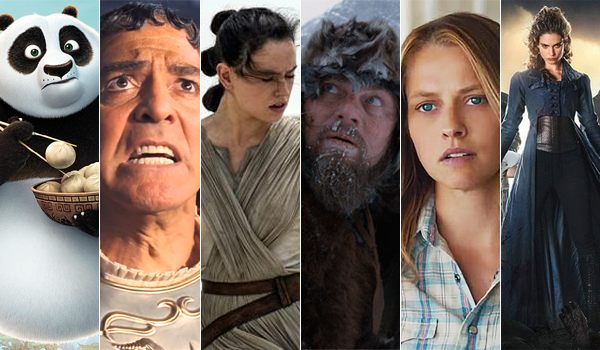 Kung Fu Panda 3 continued to comfortably lead the box office with an estimated $21.0 million over Super Bowl weekend. The 3D computer animated sequel from Fox and DreamWorks Animation was down a sizable 49 percent from last weekend's debut. Without adjusting for ticket price inflation, Kung Fu Panda 3 registered the ninth largest Super Bowl weekend performance of all-time. Kung Fu Panda 3 has grossed $69.05 million in ten days of release. That is below expectations and places the film 24 percent behind the $90.73 million ten-day take of last year's Hotel Transylvania 2 (which fell 31.5 percent in its second weekend to gross $33.19 million). With no new family films entering the marketplace next weekend, Kung Fu Panda 3 is likely to hold up very well over the Presidents Day holiday frame.

Universal's Hail, Caesar! debuted in second place with an estimated $11.44 million. The Coen Brothers directed film featuring Josh Brolin and George Clooney opened in line with pre-release expectations, which were kept in check a bit by the film's relatively modest location count and its Super Bowl weekend launch. Compared to previous collaborations between The Coen Brothers and Clooney, Hail, Caesar debuted 40 percent below the $19.13 million opening of 2008's Burn After Reading and instead opened more in line with the $12.53 million start of 2003's Intolerable Cruelty. Normally Hail, Caesar! would be a prime candidate for strong holding power (especially after opening against the Super Bowl), but that may not ultimately be the case for the film going forward given both its poor C- rating on CinemaScore and 48 percent current audience score on Flixster.

Fox's The Revenant claimed third place with an estimated $7.1 million. The Alejandro González Iñárritu directed western starring Leonardo DiCaprio fell a respectable 44 percent from last weekend. The Revenant is now on the verge of crossing the $150 million mark with $149.70 million after 31 days of wide release (and an additional two weeks of platform release). The film is currently running an impressive 29 percent ahead of the $115.75 million 31-day take of 2010's Shutter Island.

Lionsgate's The Choice rounded out the weekend's top five with an estimated $6.09 million. The Nicholas Sparks adaptation starring Benjamin Walker and Teresa Palmer debuted below its already modest expectations and delivered the smallest opening weekend take ever for a Sparks adaptation. The Choice opened 39 percent softer than the $10.00 million start of 2014's The Best of Me, which previously represented the softest opening weekend performance for a Sparks adaptation. Given the performances of The Best of Me, last year's The Longest Ride and now The Choice, it's clear that Sparks adaptations aren't anywhere near as popular as they were only a few years ago. On a positive note, The Choice did receive a solid B+ rating on CinemaScore (which represented the strongest score among this weekend's three new releases), and currently has a 64 percent audience score on Flixster. The Choice is also likely to receive some help next weekend from Valentine's Day.

Pride and Prejudice and Zombies followed in sixth place with an even more disappointing estimated debut of $5.20 million. The horror romance hybrid from Sony and Screen Gems had been widely expected to get off to a stronger start thanks in part to the fanbase of the 2009 Seth Grahame-Smith novel the film was adapted from. Ultimately audiences clearly weren't interested, as Pride and Prejudice and Zombies opened a very underwhelming 68 percent below the $16.31 million start of 2012's Abraham Lincoln: Vampire Hunter (which was also adapted from a Seth Grahame-Smith novel). Reaction to the film also appears to be underwhelming as Pride and Prejudice and Zombies received a B- rating on CinemaScore and has a current audience score of 62 percent on Flixster.

Fox reports this morning that Kung Fu Panda 3 held onto first place against this weekend's trio of new releases. The well-received animated sequel scored $5.2 million on Friday, down just 50 percent from opening day last week. That brings its domestic tally up to a healthy $53.25 million after eight days of release as it aims to continue cornering the family market through February. BoxOffice is projecting a sophomore frame around $21.5 million.

The Coen Brothers' star-studded Hail, Caesar! opened to an estimated $4.31 million on Friday, including Thursday night's $543,000 launch. Unfortunately, the film proved to be more front-loaded than expected, which will probably result in a weekend finish closer to pre-release expectations. By comparison, The Monuments Men earned over $6.9 million on its opening day with a near identical Thursday night figure of $545,000 included. Although critics have generally approved of the film with a 79 percent Rotten Tomatoes score, early word of mouth among audiences doesn't appear to be nearly as positive judging by the disappointing 51 percent Flixster score this morning. BoxOffice and Universal are both projecting an opening weekend around $11.6 million. Hopefully the pic will find legs after Super Bowl Sunday and in the weeks ahead.

Lionsgate reports that The Choice took in an estimated $2.48 million in third place for its opening day. Unfortunately, that fell 40 percent short of fellow Nicholas Sparks adaptation The Best of Me, which bowed to a $4.1 million opening day in October 2014. While critics have given the film just a 6 percent score, word of mouth is more middling (relative to most romantic drama scores) at 54 percent. The one bit of good news for the film is that it could prove back-loaded as it will aim to benefit from Valentine's date crowds next weekend. For now though, it's looking at an opening weekend around $5.5 million.

The Revenant came in fourth place on Friday with an estimated $2.08 million, off just 35 percent from last week. That brings the 12-time Oscar nominee's domestic total to an excellent $144.7 million and counting. Look for a weekend finish around $6.5 million.

Sony's Pride and Prejudice and Zombies landed in fifth place with its debut yesterday, pulling in a disappointing $2.035 million. The film had been tracking fairly well via social media outlets, but that unfortunately didn't translate to the box office despite the studio hoping to duplicate past teen/young adult-friendly openers on Super Bowl weekend. On the plus side, the film claims the best Flixster score (61 percent) among this weekend's openers despite a poor 41 percent critics' score. Sony is projecting a $5.3 million weekend, although we're a bit more conserative at $5.1 million.

Finally, Star Wars: The Force Awakens officially became the first movie in history to cross the $900 million threshold domestically on Friday with another $1.76 million in its 50th day of release. With a total of $900.8 million in the bank, the all-time domestic box office champion continues to hold strongly in the post-holiday winter season as it eased just 29 percent from last Friday. We're projecting a weekend tally around $6.6 million, which would put it in a close race against The Revenant for third place this weekend.

Updated weekend estimates from the studios will be posted on Sunday morning.

Friday Update: Sources report that Hail, Caesar! bagged an estimated $543,000 from Thursday night's first shows, a very encouraging start to the weekend that's in line with The Monuments Men's $550,000 Thursday start in 2014. Caesar has the distinction of opening on Super Bowl weekend though, so the comparison isn't completely straight, but the film could net an opening weekend in the $17-20 million range based on last night's performance.

Pride and Prejudice and Zombies scored $300,000 last night, a fair start for the film targeting teens and young adults this weekend. That's noticeably behind the $530,000 of Warm Bodies' Thursday launch before Super Bowl weekend three years ago. Look for a weekend around $10-12 million.

All around, Kung Fu Panda 3 will likely repeat as the top film this weekend, but Hail, Caesar! has a slim outside chance to unseat it should the Coen Brothers film over-perform today and/or Saturday.

BoxOffice will have weekend estimates based on official Friday estimates from the studios on Saturday morning.