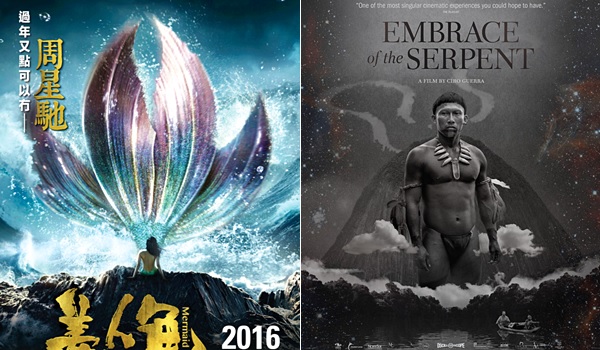 Měi Rén Yú (The Mermaid) was off to a terrific start this weekend with an estimated $1.02 million from 35 locations, for a per-location average of $29,000. The Stephen Chow directed Mandarin-language fantasy comedy is the highest grossing film ever in China and looks like it's in store for a strong performance in North America (where it's being distributed by Sony). Chow's Kung Fu Hustle was also a strong performer in North America (for Sony Pictures Classics) back in 2005. That film launched in platform release with $269,225 from 7 locations (for a per-location average of $38,460), took in $6.75 million in its first weekend of wide release and ultimately finished with $17.11 million in North America. Sony currently plans to expand Měi Rén Yú (The Mermaid) into roughly 25 new locations next weekend.

Upon expanding into moderate release this weekend, Sony Pictures Classics' The Lady in the Van took in an estimated $1.50 million from 540 locations, for a per-location average of $2,780. The Nicholas Hytner directed film starring Maggie Smith was up 171 percent from last weekend, when the film was playing in 410 fewer locations. The Lady in the Van continues to have a solid platform run with $3.81 million in 38 days (and an additional one-week Oscar qualifying run back in early December).

Fox International Productions' Neerja was off to a nice start this weekend with an estimated $585,315 from 73 locations, for a per-location average of $8,018. The Hindi-language drama thriller starring Sonam Kapoor did open well below the $2.43 million debut of Kapoor's last film, last year's Prem Ratan Dhan Payo, though that film did have a significantly larger initial count of 287 locations.

In its second weekend of release, Drafthouse Films' Where to Invade Next registered an estimated $560,210 from 275 locations, for a per-location average of $2,037. The Michael Moore directed documentary was down 38 percent from last weekend, though it should be noted that the film was playing in 33 fewer locations this weekend. Where to Invade Next has grossed $1.99 million in ten days. While that would be a good performance for most documentaries, the film is also on course to perform well below each of Moore's previous four films.

Tags: Měi Rén Yú (The Mermaid), Embrace of the Serpent, The Lady in the Van, Neerja, Busco Novio Para Mi Mujer, Where to Invade Next, The Big Short, Spotlight, Brooklyn, Room, north-america