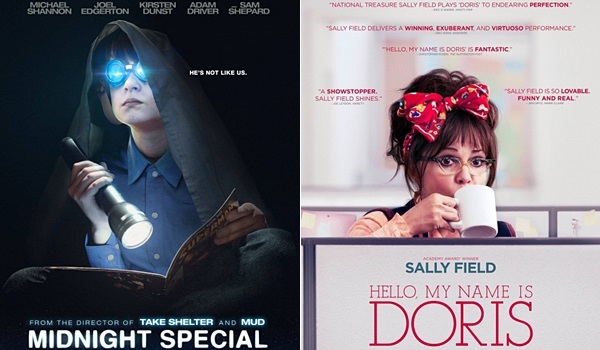 Warner's Midnight Special was off to a healthy platform start this weekend with an estimated $185,000 from 5 locations in New York, Los Angeles and Austin. That gave the Jeff Nichols directed sci-fi film starring Michael Shannon a per-location average of $37,000 for the frame. Midnight Special opened significantly stronger than the platform launch of 2011's Take Shelter, which opened with $52,041 from 3 locations (for a per-location average of $17,347). Take Shelter went on to gross $1.73 million during its domestic run. Midnight Special has received very good critical reviews, as the film currently boasts an 86 percent Tomatometer on Rotten Tomatoes. The film is scheduled to expand into additional locations on April 1.

In its second weekend of platform release, Bleecker Street's Eye in the Sky took in an estimated $427,000 from 35 locations, for a per-location average of $12,200. The critically acclaimed film starring Helen Mirren and the late Alan Rickman was up 275 percent over last weekend, when the film was playing in just 5 locations. Eye in the Sky has grossed $579,000 in ten days of platform release. The film is scheduled to go into wide release on April 1.

Upon receiving a major expansion this weekend, Paramount's Anomalisa took in an estimated $740,000 from 573 locations, for a per-location average of $1,291. This weekend represented the widest location count to date for the stop motion animated film directed by Charlie Kaufman and Duke Johnson. Anomalisa has grossed $3.42 million through 82 days of platform release.

Sony Pictures Classics' The Lady in the Van continued to hold up well with an estimated $429,948 from 301 locations, for a per-location average of $1,428. The Nicholas Hytner directed film starring Maggie Smith was down just 25 percent upon playing in 62 fewer locations this weekend. The Lady in the Van has grossed a very solid $8.77 million in 66 days (and an additional one-week Oscar qualifying run back in early December) and remains on course to pass the $10 million mark before the end of its run.

City of Gold took in an estimated $66,500 from 14 locations, for a per-location average of $4,750. The documentary from IFC Films' Sundance Selects label, featuring food critic Jonathan Gold was up a slim 6 percent over last weekend upon expanding into 10 additional locations. City of Gold has grossed $156,500 in ten days and will expand into additional locations next weekend.

Tags: Midnight Special, Hello My Name Is Doris, Kapoor & Sons - Since 1921, Eye in the Sky, Anomalisa, The Lady in the Van, City of Gold, north-america