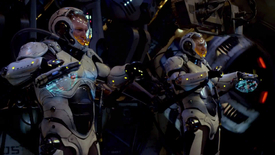 This is a first-ever bundled offering in Canada, and allows movie-goers to purchase a movie admission ticket and pre-order the UltraViolet digital version of Pacific Rim at the same time. The pre-ordered digital version will be available before the DVD and Blu-ray release date, and Cineplex SuperTicket purchasers will be the first to receive their UltraViolet version.

Pacific Rim SuperTicket purchasers also receive access to exclusive, never before seen content exploring filmmaker Guillermo del Toro's vision. In 'Cinematic Adventure,' see how del Toro's unique approach to monster films brought an unprecedented cinematic scale to the massive Kaiju and Jaeger battles. ‘A Primer on Kaiju and Jaegers' traces the origins of two of Japanese cinema's most iconic creations, the Kaiju and Mecha. Get an awe-inspiring look at how del Toro's production built "to scale" fully operational sets in ‘Mega Sized Sets.' Finally, ‘The Importance of Mass and Scale' reveals the Pacific Rim design aesthetic of using small details to define the space occupied by the Kaijus and the Jaegers.

"SuperTicket brings Cineplex movie-goers incredible convenience and extra value," said Pat Marshall, Vice President, Communications and Investor Relations, Cineplex Entertainment. "There's no easier way to purchase a digital movie, all while benefitting from special offers and bonus SCENE points. SuperTicket is one of the most innovative offers in the movie business today."

Pacific Rim SuperTicket purchasers will also have the opportunity to receive up to 725 bonus SCENE points.

"We are thrilled to be partnered with Cineplex to bring this exciting new opportunity to movie-goers throughout Canada," said Dan Fellman, President, Domestic Distribution, Warner Bros. Pictures. "We're excited that Pacific Rim will be our inaugural title for this program."

"SuperTicket is an intriguing way to extend the movie-going experience beyond the theatre," said del Toro. "Fans of Pacific Rim will enjoy early access to the UltraViolet title and exclusive content that really gets to the bottom of the inspiration behind the film and how it was made."

Purchasing a SuperTicket couldn't be easier:

• Guests will receive two vouchers - one for their theatre admission and the other containing a unique access code, which they can redeem for the UltraViolet digital version at SuperTicket.com.

• When the movie and bonus digital content are available, it will be automatically added to the purchaser's Cineplex Store locker - available at CineplexStore.com.