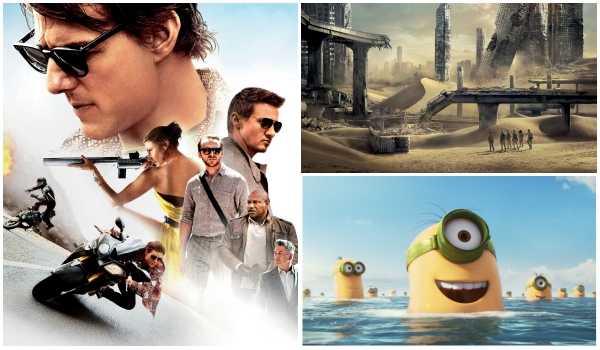 Mission: Impossible - Rogue Nation grabbed back the international box office crown from fellow Paramount pic Terminator: Genisys with $50.5 million this weekend from 63 total territories. China earned an impressive $45.2 million from Friday to Sunday and has $86.3 million since opening on Tuesday. Rogue Nation’s 6-day opening was 17% below Jurassic World’s and 134% above MI4’s. Among holdovers, France dropped 48% for $860K and $19.6 million after 5 weekends, Japan earned $740K for a $38.2 million cume, Germany grossed $460K to bring its total to $13.0M, and the UK/Ireland added $450K lifting its cume to $31.9 million. Rogue Nation has earned $424.8 million overseas and $613 million worldwide.

Thanks to a $19.3 million opening day in China on Sunday according to official Chinese estimates (Universal reports $20.1M), Minions passed Toy Story 2 to become the second highest-grossing animated film of all-time worldwide. Its overseas total this frame came to $26.1 million from 57 territories for a total of $746.5 million and $1.080 billion worldwide. China’s opening, despite performing below lofty expectations, was 40% bigger than Despicable Me 2’s entire opening weekend and was good enough to take the highest-grossing opening day and single day record for an animated film in China. Minions opens in its final territory Greece on September 24.

Disney/Pixar’s original hit Inside Out scored $5.3 million from 34 overseas territories this weekend, lifting its total to $395.9 million at the international box office and $747.361 million worldwide. There were no new openings this weekend. Italy opens up next weekend, Germany on October 1, and China on October 6. Inside Out sits as the third highest-grossing Pixar animation worldwide behind Finding Nemo ($895.6

Disney’s diminutive superhero Ant-Man hauled off with $5.1 million at the international box office this weekend. To date the film has grossed $218.6 million overseas and $394.741 million worldwide. South Korea was down just 39% this weekend with $4.6 million and held on to the number one spot with an 11-day $16.7 million cume. Ant-Man will try to hit $500 million with openings next weekend in Japan and Greece and China on October 16.

Straight Outta Compton rolled into 3 new overseas territories this weekend grossing an estimated $4.3 million from 15 total territories. The NWA biopic from Universal Pictures has grossed $25.0 million at the international box office and $180.7 million worldwide. Among openers, South Korea opened soft with $186K from 185 screens coming in 8th behind Self/Less. Sweden opened in third with $250K and France-Switzerland bowed in first with $68K. Holdovers include Australia ($1.6M/$5.9M cume), UK/Ireland ($969K/$10.8M cume), Germany ($565K/$4.6M). France, Belgium, Croatia, and Czech Republic open next weekend with 22 more territories planned for the next few months.

M. Night Shyamalan’s The Visit opened day-and-date with North America in 14 European territories and grossed $3.8 million. Combined with NA’s opening of $25.7 million, the worldwide total is $29.5 million after one frame. The thriller took in $1.6 million including previews from the UK/Ireland for a #3 opening while Spain opened at #1 with $1.6 million as well. Portugal grossed $83K, Poland earned $82K, and Turkey over-performed according to Universal with $72K. Next weekend The Visit visits Malaysia, Singapore, and Slovenia.

Warner Bros’ Vacation grossed an estimated $3.6 million across 58 overseas territories. Brazil opened in #2 with $696K while Holland opened at #1 with $291K. Vacation has earned $40.0 million overseas and $97.2 million worldwide.