Filmmaking at the Summit: Interview with 'Everest' Director Baltasar Kormákur 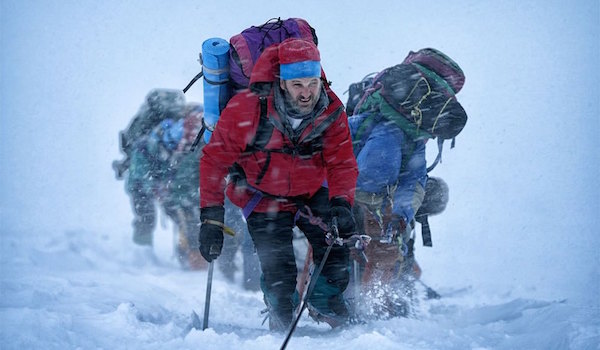 Baltasar Kormákur began his filmmaking career as an actor in his native Iceland before moving behind the camera. As a director, Kormákur has helmed a variety of films from Icelandic thrillers (Jar City) to U.S. indie crossovers (Inhale) and, more recently, Hollywood action flicks for summer audiences (2 Guns). Kormákur's breakout film in the U.S. was Contraband, the stateside remake of the Icelandic hit Reykjavík-Rotterdam, in which he directed Mark Wahlberg in a role that was originally his own. The director's biggest challenge to date, however, will hit theaters this September with Universal's Everest. The film was partly shot on location in Nepal and recounts the tragic events of the 1996 Mount Everest disaster that are chronicled in Jon Krakauer's best-selling nonfiction book Into Thin Air. Months of preparations were put to the test as the filmmakers and cast (including Jake Gyllenhaal, Josh Brolin, and Keira Knightley) endured a brutally cold and difficult shoot, battling the elements to get the feel of the real-life drama on film. BoxOffice spoke with Kormákur about the challenges of shooting in the mountains and how it compares with the difficulties foreign directors encounter in Hollywood.

Before we even get into the challenges of shooting the film, I imagine pre-production was an odyssey in itself. How did you prepare to tackle this story? Did Jon Krakauer's book or the IMAX documentary play any role in the planning?

I read all the books. I did some mountaineering training to get into it. I actually do a lot of traveling on horses in the mountains, so it was a bit different-that's the Icelandic way of doing it. I went to New Zealand, traveled the whole world to meet everyone possible who was either a part of the story or closely connected to it. People like the widow of Rob Hall, the base-camp manager Helen Wilton, the physician Caroline Mackenzie, they're all in New Zealand. Guy Cotter, who was part of the story. And I had David Breashears with me. I went to America to meet Beck Weathers, and we spent two nights together there. Basically all the information I could gather --I have never prepared so much for a movie. I also wanted to make sure these people were OK with me doing this and create kind of a trust. I wanted to create a personal contact. I met Sarah Hall, Rob Hall's daughter, who is a large part of the story. All the mountain stuff, we spent quite a lot of time on that. The movie pushed us a little bit, so it gave me even more time to do these kinds of things. And being Icelandic, I'm born in bad weather, you know?

Is there any way to prepare for weather concerns like these during pre-production?

It's almost impossible. We kept on asking ourselves, where are we going to shoot this? What are we going to get? We ended up shooting in four countries. When we went to Nepal, to Kathmandu, we traveled up as close to base camp as we were allowed to by the insurance companies, and you don't know if you're going to have half of the actors puking or falling apart or not, so you've got to kind of play it by ear. And then in the Dolomites we ended up going to the coldest, highest place we were allowed to shoot. We were up at three to four thousand meters in negative 30 degrees Celsius. I don't know what that is in Fahrenheit, but it's damn cold. And we were shooting for 12 hours in places like that, so it created a situation where it hadn't snowed as much in the Dolomites. We were constantly getting ourselves out of avalanche danger. Then when you're doing the studio work, it's a whole different trouble. You're wearing the costumes that you had in negative 30 degrees. We thought about shooting in Iceland, even in New Zealand, and then there's the whole money issue about tax rebates. In the end, it was just about where it was physically possible to make this happen. We started in Nepal, we were up there really high in January and there's no tourism at that time, which was very good for us. But it was so cold, and there was no heating in the hostels. We stopped in little towns along the way, and we had to sleep with electric blankets-all with a cast of A-list stars. I think it gave a lot of reality for the actors to get to know each other very closely in a different way than knocking on each other's trailers and saying, "I just wanted to let you know I'm here." They were basically forced to be together, even carrying some of the equipment because there were no vehicles allowed up in Lukla, the famous airstrip you land on, the most dangerous airport in the world. Above that, we had a couple of helicopters dropping things off here and there, but you had to carry stuff to most of the places.

Many people when they do something like this, they train for months. Was there any kind of program that you put in place for the crew and actors before you started?

Most of the actors had training. It was such a huge cast and filmed with different groups of people, so there were times you had A-list stars as extras. It may not be their scene, but they're still there in the story. I know Jason Clarke and Josh Brolin, and I think Jake Gyllenhaal as well, most of these guys had a long training. They did it on their own for quite a while, and then we had group training. At that point, they were way ahead. We also went to a place outside of London where you can go into a decompressed cabin and feel the lack of oxygen. We tested that out on ourselves and our brains and got all the information about what it does to you so they could understand the dizziness and lack of clarity up there, but that came by itself when you actually got up there. Even at maybe three or four thousand meters, you're still getting mountain sickness. Just go to Sundance and you'll actually feel it.

One of the things that struck me in Werner Herzog's diary about the making of Fitzcarraldo, Conquest of the Useless, was that during production, it was the most unexpected, mundane challenges that proved to be the most difficult. Did you find the same to be true in your experience making Everest?

The weather was a daily issue. Our time in the Dolomites was the most complicated. It snows in the morning and then the sun dries it up later in the day. And then you have this drilling headache so you can barely concentrate on what you're doing. Then you come to set in the morning and the first thing you hear is, "We can't shoot today." Why? "Because there's an avalanche coming." There was a big avalanche accident in the Dolomites when we were there. The saddest thing is we had Sherpas die when we had a second unit up there. I'm not exaggerating; you can't make a more complicated film. Imagine going to work at seven a.m., standing in a freezing-cold elevator for 40 minutes getting up that mountain, and as soon you come up, there are clouds on the mountain.

I'm sure the payoff comes with actually getting on-location footage. What did you want the film to look like?

I wanted to make the film look like a feature film about Everest shot at Everest. I was very specific. There are numerous documentaries made there, handheld stuff, and I didn't want to go for that style. Though I like it, I just felt it would look like any other documentary on Everest. I wanted to give you a big scope of the mountain. It's not an action movie like some people maybe think it is. I'm sure the studio wants people to think it is. It's a dramatic story and for me, I wanted the wow factor to be there more than the shock factor. I wanted the viewer to realize the enormity of the mountain as the camera pulls back, and you see how big the mountain is and how small the people are. Everyone knows this mountain, so you can't fake yourself around it. You had to visualize the mountain with every shot. I call it the "hair extension" way: instead of shooting the whole thing in the studio and have a wig, you use the real stuff and then pepper in studio footage so you always have the reality as reference.

After such a difficult shoot, I assume your next film will be set in Miami or Hawaii.

I have a big film in the Persian Gulf about an oil spill with Cate Blanchett that I signed with Fox. I have a Viking movie that I've been developing and Universal has the rights to. I plan on doing that in Iceland actually, with a volcano. I guess I'm just stuck to filming them as hard as possible. I don't think any of them will be as hard as Everest. You can't push it much further than that. I don't know what could be more complicated; maybe a movie shot way under the ocean. I'll let James Cameron do that.

What has been your experience as an international filmmaker in Hollywood? Has it been as troublesome as some of the stories we hear?

Less so than I would've imagined after all the horror stories I had heard. I've had a really easy creative dialogue with people. I knowingly went for more commercial movies in the beginning just to get my foot in. It was a conscious decision to go that way when I started with those movies. It's quite a reach, and I don't think people realize how big of a step it is to cross the Atlantic Ocean as a director. I'm the only one from this country to ever have done that.