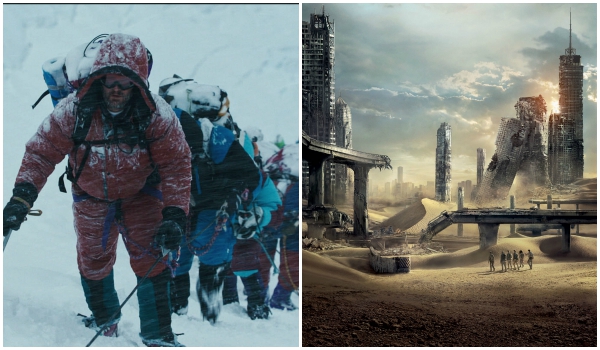 Maze Runner: The Scorch Trials is the #1 film at the international box office this weekend earning $43.3 million (+62%) from 12,303 screens across 66 markets. The sequel from 20th Century Fox has earned $78.0 million overseas and $108.3 million worldwide taking into account its #1 North American opening this weekend.

The Scorch Trials opens in Germany, Switzerland, Belgium and 4 smaller markets next weekend.

Universal’s Everest scaled to $28.2 million across 36 overseas territories in its opening frame this weekend. Combined with North America’s IMAX opening, the film has an early worldwide total of $35.8 million.

Everest will release in 29 additional territories over the next few months including Brazil, France, Italy, South Korea, Russia and 17 smaller markets next weekend.

Minions grossed $22.8 million (-13%) this weekend from 57 overseas territories for an international total of $785.3 million and a worldwide total of $1.118 billion. Universal’s global animated hit jumped over MI5 to take the weekend crown in China with $19.4 million for an 8-day total of $49.8 million. Despite performing under expectations, Minions will pass the lifetime gross of Despicable Me 2 ($53 million) sometime this week.

Mission: Impossible - Rogue Nation grossed $21.2 million (-58%) this weekend from 53 total overseas territories, bringing the international cume to $464.7 million and the worldwide total to $656.4 million. China took in another $18.2 million just behind Minions and has grossed $120.3 million after 13 days of release. Rogue will pass Interstellar ($122.6 million) this week to become the highest-grossing imported 2D film of all-time in China.

Inside Out marched into Italy this weekend, earning $6.0 million to take the biggest opening ever for a Pixar release there. In total, Pixar’s original hit grossed $9.8 million (+85%) from 34 overseas territories, lifting the international total to $408.8 million and the worldwide total to $761.683 million after 14 weekends of release. The UK/Ireland has been particularly friendly to Joy and her emotional gang, handing over $58.1 million to become the third highest grossing Pixar title behind Toy Story 2 and Toy Story 3 and the second highest grossing original animated title behind Frozen. Two territories remain for Inside Out: Germany on October 1 and China on October 6.

Straight Outta Compton earned $3.8 million (-12%) in 20 territories this weekend. The NWA biopic has earned $30.3 million overseas and $189.2 million worldwide. France opened with $1.4 million at 275 dates and Belgium opened with $106K at 21 dates. Compton opens in Denmark next weekend.

Disney’s tiniest superhero Ant-Man flew into Japan and Greece this weekend and hauled off with $3.2 million (-37%) from 11 total overseas territories. The film has now grossed $223.8 million at the international box office and $401.387 million worldwide with China still to come on October 16. Japan bowed at #3 behind two local films with a two-day opening of $1.7 million, exceeding both the openings of Captain America 2 and Thor 2.

M. Night Shyamalan’s The Visit scared up $2.4 million (-37%) from 17 overseas territories this frame, lifting its early international total to $8.2 million and the worldwide cume to $50.55 million. Spain held well with $1 million for a 10-day total of $3.6 million and UK/Ireland took $813K for a 10-day total of $3.1 million. The Visit opens in Australia, Austria, Germany, Norway, German-Switzerland, Lebanon, and the UAE next weekend.