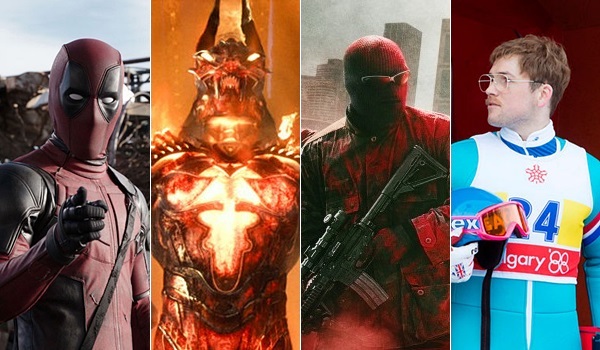 Fox's Deadpool took in $2.85 million on Super Tuesday to lead the daily box office for a 19th consecutive day. The Ryan Reynolds led blockbuster antihero film was up 22.5 percent over Monday and down 45 percent from last Tuesday. Deadpool has grossed a massive $290.44 million in 19 days, which leaves the film just $9.56 million away from becoming the first X-Men universe film to reach the $300 million unadjusted domestic mark. Deadpool is currently running an extremely impressive 50 percent ahead of the $193.34 million 19-day take of 2014's X-Men: Days of Future Past.

Lionsgate's Gods of Egypt held steady in second place with $1.27 million. The expensive action fantasy film featuring Gerard Butler was up 33 percent over Monday. It should be noted that holdovers in general experienced strong daily percentage increases on Tuesday, thanks in part to Super Tuesday. Gods of Egypt has grossed $16.35 million in five days. That is towards the higher end of the film's relatively modest expectations, but is soft with the film's high price tag in mind. Gods of Egypt is running 56 percent behind the $37.28 million five-day start of 2011's Immortals.

Risen was up two spots from Monday to move into third on Tuesday with $0.717 million. The faith-based film from Sony's AFFIRM Films label starring Joseph Fiennes increased 42 percent over Monday and decreased 46 percent from last Tuesday. Risen has grossed $23.74 million in twelve days. That is towards the higher end of expectations and places the film 24 percent ahead of the $19.21 million twelve-day gross of 2014's When the Game Stands Tall.

Kung Fu Panda 3 was up three spots from Monday to claim fourth place with $0.681 million. The 3D computer animated sequel from Fox and DreamWorks Animation was up a sizable 60 percent over Monday and down only 5 percent from last Tuesday. Kung Fu Panda 3 has grossed $129.46 million in 33 days, but is sure to take a hit this coming weekend from the release of Disney's Zootopia on Friday.

Triple 9 was down two spots from Monday to round out Tuesday's top five with $0.650 million. The ensemble crime drama from Open Road increased 25 percent over Monday's performance. Triple 9 is performing below expectations with a five-day start of just $7.28 million. The film is running a disappointing 54 percent behind the $15.91 million five-day take of 2012's End of Watch (which was also an Open Road release).

Fox's Eddie the Eagle was up two spots from Monday to place in sixth with $0.591 million. The sports comedy starring Taron Egerton and Hugh Jackman was up a strong 61 percent over Monday. Eddie the Eagle has grossed just $7.04 million in five days, which is a bit below the film's modest pre-release expectations. The film will hope to hold up well going forward with the aid of strong word of mouth.