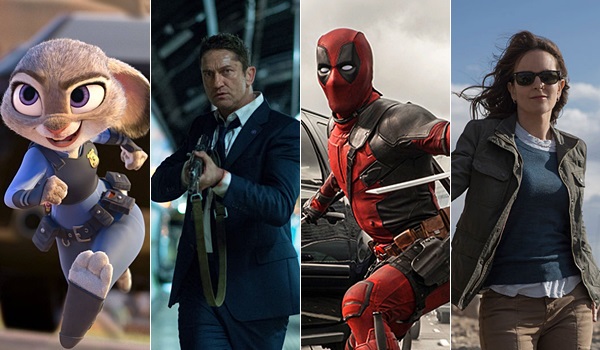 Disney's Zootopia took in $3.91 million on Thursday to lead the daily box office for a seventh straight day. The critically acclaimed 3D computer animated film from Walt Disney Animation Studios was up a healthy 5 percent over Wednesday's performance. Zootopia was easily the week's top film with a very strong seven-day start of $92.62 million. That was 15 percent ahead of the $80.30 million seven-day take of 2014's The LEGO Movie and 22 percent ahead of the $75.64 million seven-day start of 2014's Big Hero 6.

Fox's Deadpool was up one spot from Wednesday to move into second place on Thursday with $1.36 million. The Ryan Reynolds led blockbuster antihero film was up 2 percent over Wednesday and down a very solid 35 percent from last Thursday. Deadpool placed in third for the week with a weekly take of $22.52 million. That represented a 45 percent decline from the previous frame and brings the film's four-week total to an exceptional $317.28 million.

Paramount's Whiskey Tango Foxtrot rounded out its first week of release with a fourth place take of $0.565 million. The R-rated comedy starring Tina Fey was down 3 percent from Wednesday. Whiskey Tango Foxtrot finished in fourth for the week with a seven-day start of $9.97 million. That was a bit below expectations and 36 percent softer than the $15.55 million seven-day start of 2014's This is Where I Leave You.