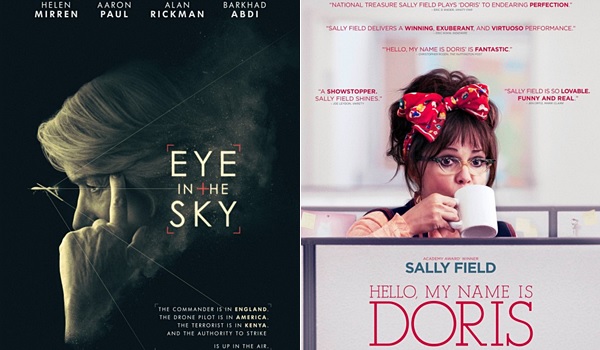 Bleecker Street's Eye in the Sky registered the weekend's largest per-location average ($23,400) after taking in an estimated $117,000 from 5 locations in New York and Los Angeles. Eye in the Sky delivered Bleecker Street its largest per-location average for a platform launch to date, as the young distributor's previous per-location high-mark was the $17,364 average of last year's I'll See You In My Dreams (which opened with $52,091 from 3 locations). Eye in the Sky, which stars Helen Mirren and the late Alan Rickman, has received very strong critical reviews, as the film currently boasts a 95 percent Tomatometer on Rotten Tomatoes. Eye in the Sky will expand into additional locations next weekend and is scheduled to go into wide release on April 1.

Roadside's Hello, My Name Is Doris also had a nice platform start this weekend, as the film took in an estimated $85,240 from 4 locations in New York and Los Angeles. That gave the Sally Field led comedy a per-location average of $21,310 for the frame. Hello, My Name Is Doris has also received strong critical reviews, as the film currently has an 89 percent Tomatometer on Rotten Tomatoes. The film is scheduled to expand into additional locations next weekend.

City of Gold was off to a very solid platform launch with an estimated $64,000 from 4 locations in New York and Los Angeles. That gave the documentary featuring food critic Jonathan Gold a per-location average of $16,000 for the frame. The release from IFC Films' Sundance Selects label currently has a healthy 85 percent Tomatometer on Rotten Tomatoes.

A24's Remember was off to a softer platform start this weekend with an estimated $20,000 from 2 locations in New York, for a per-location average of $10,000. Reviews for the Atom Egoyan directed drama thriller starring Christopher Plummer have been mixed, as the film has a current 68 percent Tomatometer on Rotten Tomatoes.

Oscilloscope's Embrace of the Serpent expanded well with an estimated $186,007 from 75 locations, for a per-location average of $2,480. The critically acclaimed film from Colombia was up a healthy 164 percent over last weekend (when it was playing in 52 fewer locations) and didn't see its per-location average drop all that much in the process. Embrace of the Serpent has grossed $521,008 through 26 days of platform release. Oscilloscope plans to expand the film into approximately 30 more locations next weekend.

Broad Green Pictures' Knight of Cups had a less impressive expansion with an estimated $90,135 from 36 locations, for a per-location average of $2,504. The Terrence Malick directed film starring Christian Bale was up 49 percent from last weekend upon expanding into an additional 32 locations this weekend. Knight of Cups has grossed $175,726 in ten days of platform release. The film is performing quite modestly given the involvement of Bale and Malick and has seen its potential limited by poor critical reviews.

Sony Pictures Classics' The Lady in the Van continued to hold up well with an estimated $569,158 from 363 locations, for a per-location average of $1,568. The Nicholas Hytner directed film starring Maggie Smith was down just 21 percent upon playing in 66 fewer locations this weekend. The Lady in the Van has grossed a very solid $8.05 million in 59 days (and an additional one-week Oscar qualifying run back in early December) and is looking like it will pass the $10 million mark before the end of its run.

Sony's Měi Rén Yú (The Mermaid) took in an estimated $150,000 from 82 locations, for a per-location average of $1,829. The Stephen Chow directed Mandarin-language fantasy was down a sharp 60 percent upon playing in 24 fewer locations this weekend. Měi Rén Yú (The Mermaid), which is the highest grossing film ever in China, has grossed $2.99 million through 24 days of platform release in North America.

Tags: Eye in the Sky, Hello My Name Is Doris, City of Gold, Remember, Embrace of the Serpent, Knight of Cups, The Lady in the Van, Měi Rén Yú (The Mermaid), north-america
Print