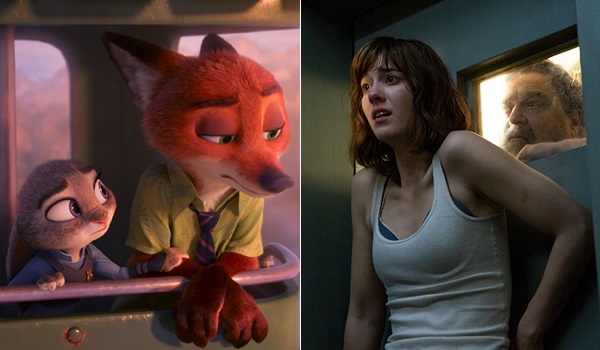 Disney's Zootopia continued to lead the box office with ease on Monday with a daily gross of $4.60 million. The critically acclaimed 3D computer animated film from Walt Disney Animation Studios was down 72 percent from Sunday and up 1 percent over last Monday. Yesterday's hold is a sure sign of more schools being off for spring break this week than last week and also a sign of the film's continued strong word of mouth. Zootopia has grossed a terrific $148.56 million in eleven days and is set to surpass the $150 million mark today. The film is currently running an impressive 33 percent ahead of the $111.62 million eleven-day take of 2014's Big Hero 6.

Paramount's 10 Cloverfield Lane claimed second place with $2.09 million. That represented a 66 percent daily decline from Sunday's performance. The J.J. Abrams produced thriller starring Mary Elizabeth Winstead and John Goodman has grossed $26.79 million in four days. 10 Cloverfield Lane is performing in line with expectations and is performing well with its modest price tag in mind. The film is currently running just behind the $27.04 million four-day start of last year's The Visit (which fell 71 percent on its first Monday to gross $1.61 million).

Deadpool placed in third with $1.18 million. The Ryan Reynolds led blockbuster antihero film from Fox continued to stabilize nicely yesterday, as it was down 62 percent from Sunday and down a very slim 17.5 percent from last Monday. Deadpool continues to pad its total as the highest grossing release of 2016 thus far with a massive 32-day gross of $329.40 million. Deadpool is likely to continue to hold up well until Warner's Batman v Superman: Dawn of Justice enters the marketplace on March 25.

London Has Fallen followed in fourth place with $1.01 million. The action thriller sequel from Focus and Gramercy fell 67 percent from Sunday and a solid 39 percent from last Monday. London Has Fallen passed the $40 million domestic mark yesterday and has grossed $40.03 million in eleven days. That is in line with expectations and is 29 percent below the $56.57 million eleven-day gross of 2013's Olympus Has Fallen.