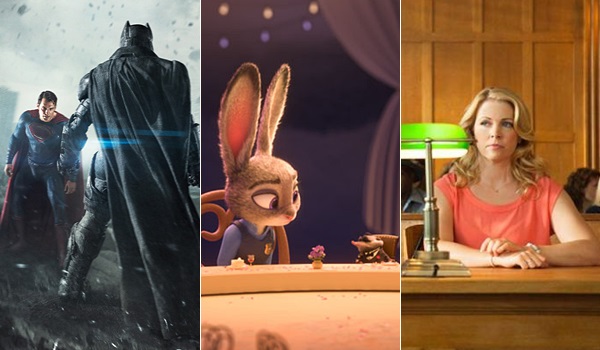 Saturday Update: Warner Bros. reports this morning that Batman v Superman: Dawn of Justice easily led the way again on Friday as expected. DC's superhero showdown was off a sharp 81 percent from opening day last week to $15.35 million yesterday, giving the film an overall eight-day domestic haul of $224.42 million. By comparison, the movie is now tracking 24 percent ahead of the pace of Man of Steel, 3 percent behind Iron Man 3, 7.5 percent behind The Dark Knight Rises, and 13 percent behind Avengers: Age of Ultron. BoxOffice is projecting a sophomore weekend tally around $48.5 million.

In second place, Disney's Zootopia added another $5.58 million yesterday as it dropped 41.5 percent from Good Friday last week. With a domestic cume of $261.5 million now, the smash hit animated film continues to enjoy excellent legs as it paces ahead of 2014's The LEGO Movie. We're projecting a $19.5 million weekend.

My Big Fat Greek Wedding 2 took third yesterday with $3.42 million, off 53 percent from opening day last week. The rom-com sequel has tallied $28.8 million through eight days of play as it looks toward an $11.3 million second frame.

Meanwhile, God's Not Dead 2 bowed to $2.95 million yesterday. Unfortunately, the sequel to 2014's faith-based sleeper hit proved somewhat front-loaded on Thursday evening and will fall short of our initial expectations. Look for an opening weekend around $8.5 million, which still dwarfs the pic's low production budget of $2 million.

Miracles from Heaven filled out the top five with $2.15 million on Friday, off 35 percent from the same day last week. With a $41.4 million total so far, Sony's latest Christian-themed success is eyeing a weekend figure of $7.2 million.

Last but not least, Meet the Blacks bowed to $1.43 million on Friday, about 36 percent lower than the opening day of Fifty Shades of Black earlier this year. Opening weekend should land around $4.1 million.

Friday Report: Sources report today that God's Not Dead 2 earned an estimated $400,000 from Thursday night screenings. That's a healthy start for the sequel to 2014's sleeper hit as compares favorably with the $430,000 Thursday launch of February's Risen. Opening weekend should land in the low-to-mid teen millions.

Meet the Blacks took in an estimated $200,000 last night, notably under the $280,000 Thursday start of Fifty Shades of Black back in January. The latter opened to $5.9 million its opening weekend, so expect a haul under that for this weekend's opener.

Meanwhile, Batman v Superman will easily lead the weekend chart again thanks to a lack of significant competition. Our full report and first weekend estimates will be published Saturday morning.

Disney's Zootopia held steady in second place with $3.20 million. The blockbuster 3D computer animated film from Walt Disney Animation Studios was up a strong 11 percent over Wednesday and down just 29 percent from last Thursday. Zootopia placed in second for the week with $38.53 million. That represented a 28 percent decline from the previous frame and brings the film's four-week total to a very impressive $255.94 million.

Universal's My Big Fat Greek Wedding 2 rounded out its first week of release with a third place take of $1.63 million. The long-awaited comedy sequel starring and written by Nia Vardalos was essentially unchanged from Wednesday's performance. My Big Fat Greek Wedding 2 finished in third for the week with a seven-day start of $25.36 million. The film continues to run on the very high end of expectations and perform nicely with its modest production budget in mind. 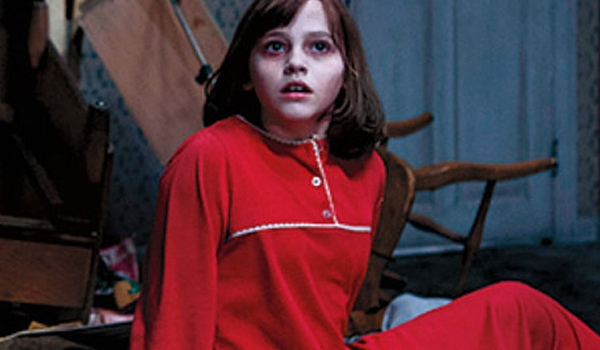 Friday Afternoon Update: This past week saw Captain America: Civil War lead once again for the second week in a row and third time in four. While its numbers haven't been gaudy over the past month like Deadpool or The Force Returns its been very consistent, even though the big tv spot campaign is not yet upon us. Batman vs Superman opened to ~$170 million last week and while Captain America and his pals might arguably not be on the same level awareness-wise, given the huge successes of the Marvel Cinematic Universe and the fact that Spider-man is joining the fray in this film its not a stretch to say that Captain America 3 will be the first non-Avenger film in the franchise to open to north of $150 million.

The Conjuring 2 debuted a new trailer this past week which was received moderately well, reaching 13,391 tweets on Sunday. Sequels to popular horror films don't always bring in big bucks (just look at Insidious 3 or Paranormal Activity 4 which opened to just above half of their predecessors), and I'm a little bit concerned here since it will be hard for it to recreate the buzz storm the original did in the weeks leading up to its release. The Conjuring was one of the social media stars of 2013, especially on Twitter where its TV spots generated huge buzz, leading to an opening day of 163,968 tweets which is one of the highest ever for the genre.