close
Yes, Jigsaw may be dead, but his game continues to be played

Those who discovered Saw at the 2004 Sundance Film Festival experienced what few subsequent moviegoers did—the gradual realization, along with the characters, that they’re pawns in an intricate game. The elaborate traps set by a terminally ill cancer patient determined to teach his prey the value of life put victims’ lives in their own hands, but not without first forcing them to make an impossible choice.


Once one has seen the first film, however, the jig(saw) on this original premise is up, and the filmmakers are tasked with inventing ever more intricate contraptions and surprising twist endings to keep fans coming back for more. In this fourth installment, despite the death of central villain Jigsaw (Tobin Bell) at the end of the third, they have.


Although Bell toplines this episode, thankfully director Darren Lynn Bousman (Saws II and III) and screenwriters Patrick Melton and Marcus Dunstan (Project Greenlight’s Feast) haven’t played any tricks. Jigsaw, aka John Kramer, really is dead but appears here extensively in flashbacks that attempt to explain the events that transformed an erudite gentleman into a sadistic monster. Meanwhile, his work goes on, as Officer Rigg (Lyriq Bent), the only cop on the case who so far has survived the investigation, finds himself the latest piece in a puzzle to help him get over his obsession of having to save everyone. 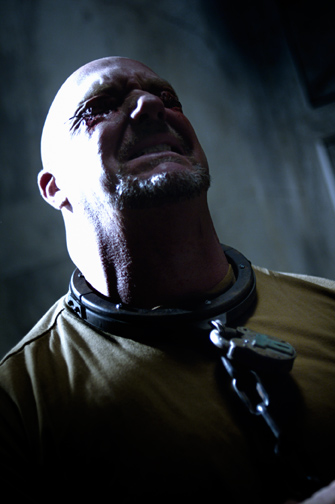 If the gore quotient has been upped in this chapter (really, after a certain threshold has been reached, who can tell?), the style has, too. The picture opens with the autopsy of Jigsaw’s body—the corpse is a remarkable creation—in which the tugging at skin and sawing at bone are a stomach-churning, eye-averting counterversion to the sanitized procedures we see on CSI. And the film concludes with a particularly spectacular death by ice cube.


Meanwhile, Bousman has adapted some of the flashier elements from the 1970s horror films his Saw II was programmed with in New York’s Museum of the Moving Image series on fright flicks, including wipes in which a body crashing through glass segues seamlessly into the next scene.


Like the second and third installments, Saw III is intricately entwined with its predecessors, so entering the $400 million franchise at this point requires the commitment of seeing all four. For fans, though, rest assured that although Jigsaw is dead (yes, really!), IV certainly won’t be the last.