In the wrong hands, Enchanted could have been cloying or, worse, tasteless—as in either bland or bad. Plucking a Disney princess from her animated kingdom and depositing her in the middle of Times Square where the usual storytelling conventions are corrupted—her song that summons the woodland critters of Andalasia draws pigeons, rats and roaches in New York City—is a clever setup that could go too far or not far enough. But under the sure direction of Kevin Lima ( Tarzan ), the animation/live-action combo strikes the perfect balance between affectionate homage and light-hearted irreverence for a delightful family-friendly holiday confection.


A 10-minute prelude in traditional 2D animation fast-forwards through the fairytale paces until Gisele, late for her wedding to a prince she met just the day before, is banished by an old hag to another kingdom far, far away. Still in her bridal gown, a glittery concoction of poofs and hoops rendered ridiculous in live-action, Giselle (Amy Adams, a Disney heroine through and through, from her fair skin to her auburn hair to her sweet princess voice) emerges through a manhole in the middle of Manhattan, where her ingenuousness and natural glide are met with cynicism and suspicion. 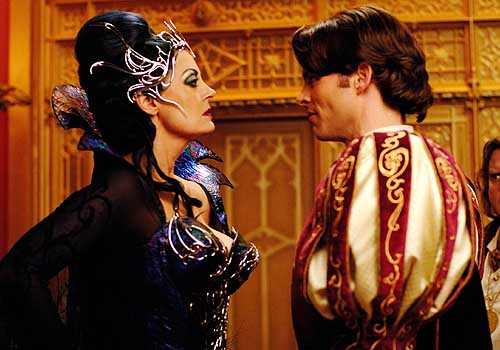 Luckily, she’s discovered by pragmatic divorce attorney Robert (Patrick Dempsey) and his daughter Morgan (sweetheart Rachel Covey), who at least take her in and get her off the streets—a scenario that doesn’t look good to would-be fiancé Nancy (Idina Menzel, Broadway’s wicked witch who, ironically, doesn’t sing). Meanwhile, in hot pursuit is Prince Edward (highlight James Marsden as an unabashed himbo) and Queen Narissa (Susan Sarandon, all campy fabulousnsess), who will do anything to hang on to her crown.


References to the Disney archive abound—poisoned apples, glass slippers and Grumpy the angry, uh, little person, lie in just the first stratum. Perhaps even more fun are the fairytale characters’ interaction with the real world, as when Prince Edward mistakes a television for a magic mirror or when Gisele demonstrates no sense of irony, offering an enthusiastic “Thank you!” to Robert’s sarcastic “Welcome to New York.” Wittier still is the real world’s reaction to the fairytale characters, as when, sword drawn, Edward asks for Robert’s last words: “You’ve got to be kidding me.” Or a frazzled mother of a brood opens her door to find a literal prince charming and says drolly, “You’re too late.”