“Well, we gave it a good shot,” says one of the last survivors of the malevolent monsters that roll into town inside The Mist when an empty gas tank appears to have foiled a final escape attempt. “Nobody can say that we didn’t.”


And nobody can say that Frank Darabont didn’t give it a good shot with this, his third adaptation of a Stephen King story. With The Mist, however, the writer/director is staging a prison break of sorts. After earning Academy Award nominations for turning two period prison stories by King into The Shawshank Redemption and The Green Mile, he’s set his sights on a decidedly different kind of King novella. This time around, the characters are instead imprisoned in a small-town supermarket after a mysterious mist enshrouds the fictional Castle Rock, Maine.


Locals and out-of-towners alike have made a run on the store in the aftermath of a destructive storm, leaving David Drayton (Thomas Jane)—an artist who paints posters for feature films, including one that looks suspiciously like an adaptation of King’s seven-novel saga The Dark Tower —and his sensitive son Billy (Nathan Gamble) stranded in a long, long line ar the checkout counter. As the customers look on in growing alarm, police cars and fire engines begin screaming past the supermarket’s plate-glass storefront and an emergency siren starts wailing. Then old Dan Miller (Jeffrey DeMunn) staggers into the store, his face lacerated. 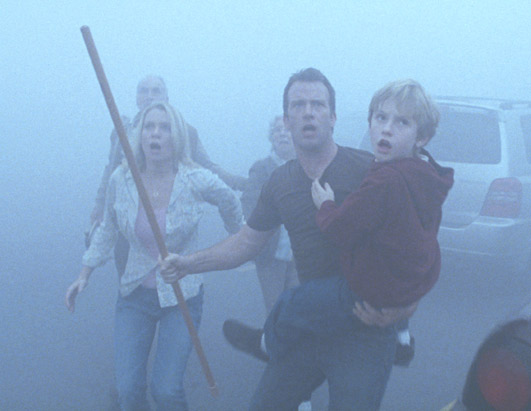 
What that something—or somethings—is, won’t be revealed here except to say that it’s sort of an illustration of the old adage “they who shop in glass supermarkets should not allow the military scientists in their midst to throw stones into other dimensions.”


But however horrible whatever is prowling around outside the store might be, the Lord-of-the-Flies situation that erupts inside is arguably worse. A virulent evangelist (Marcia Gay Harden) manages to convince an alarmingly large group of mist survivors that the end of days is at hand and that only blood sacrifices to her decidedly Old Testament God will satiate His avenging angels.


Unfortunately for Darabont, this is where his fourth film runs out of gas. What could have been a top-rate creature feature gets lost in a fog of garrulous moralizing typified by David’s stagy assertion that the veneer of civilization only lasts “as long as the machines are working and you can dial 911. You take those things away, toss people in the dark, scare the shit out of them, no more rules, you’ll see how primitive they can get.”


Not helping matters is the needlessly melodramatic music that drowns out much of the last sequence of the movie—already one of the darkest, most demoralizing denouements in recent cinematic history.