Stephen Sondheim, the modern American master of the theatrical musical, was born too late to see his works re-created for the screen by the great genre filmmakers of an earlier time. He never got to collaborate with his Vincente Minnelli, his Stanley Donen, or his Busby Berkeley.

Though Mervyn LeRoy’s 1962 version of Gypsy has its constituency, and the Robert Wise/Jerome Robbins filmization of West Side Story won the Best Picture Oscar in 1961, both were projects where Sondheim was a hired lyricist only. 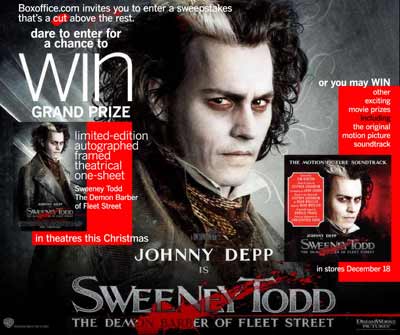 By the time he came into his own as a composer, the movie musical was ailing, the psychedelic ’60s were roaring away, and Hard Day’s Night director Richard Lester was making a pop art hash brownie out of A Funny Thing Happened on the Way to the Forum, cutting most of Sondheim’s songs as he went.

Nobody was satisfied with the filmed Forum, and the same is true of Sondheim and Harold Prince’s turgid 1978 attempt to re-create their staged A Little Night Music for the screen, where the non-singer Elizabeth Taylor was given Sondheim’s signature composition Send in the Clowns to mangle like an ex-husband. Aside from a couple of Madonna numbers written for Warren Beatty’s Dick Tracy and a warm-hearted cameo in the teen musical Camp, that’s about it for Stephen Sondheim’s movie career—until now.

For now we have Tim Burton’s gruesome and sanguinary adaptation of Sweeney Todd, the grimmest major musical in the American repertory. Based on a lurid penny dreadful saga from Victorian England, Todd tells the tale of Benjamin Barker (Johnny Depp), a barber exiled and jailed by the lecherous judge (Alan Rickman) who covets the barber’s wife. Escaping prison and renaming himself Sweeney Todd, the barber returns to London to wreak indiscriminate and genocidal vengeance on the society that ruined him.

Todd is teamed by circumstance with the widow Nellie Lovett (Helena Bonham Carter), amoral operator of a meat-pie shop. It’s an affiliation that comes in handy once Todd’s razors are returned to him and the bodies start piling up. Mrs. Lovett provides Todd with an untraceable (and indeed a lucrative) method of cadaver disposal. Soon the pie shop is flourishing, and cannibalism for fun and profit becomes the order of the day.

Burton’s Todd is easily the most handsomely mounted and proficient screen adaptation of any Sondheim work, but that’s a low standard and it doesn’t mean Todd is an especially satisfying movie. Burton seems to be completely out of sympathy with everything about his source other than its grand guignol trappings—or rather, with the opportunity they afford him to hang his old gothic horror wardrobe on a new clothesline.

Sondheim and Prince were in their high Brechtian mode when they created the original Broadway production, which was full of belching smokestacks and piercing factory whistles meant to equate the show’s cottage industry of murder and pastries with the predatory industrial capitalism that flourished in England around the time the Todd story originally took root. Theirs was a vision of human monsters and social atrocities about as far removed from the effete and poetical James Whale-isms that infest Burton’s work as Auschwitz is from Edward Scissorhands. By embracing such a harrowing and complicated piece, Burton is clearly attempting what an acknowledged artist of his genuine stature ought to reach for this far into his career, and that is to grow.

It’s a pity, then, that Burton has fallen back hard on his well-worn creative reflexes by appliquéing so many visual tropes of the Monster Chiller Theater school onto a horror story that appalls because of its lack of supernatural or mythological elements—its garish plausibility. Though the daylight exteriors are refreshingly free of inappropriate pictorial cant, Sweeney ’s interior sets (designed with his usual leaden proficiency by Dante Ferretti) embrace the noir angularity of panels ripped out of a Bob Kane/Bill Finger Batman comic; they are rife with constructivist sightlines and gargantuan skylights that wouldn’t look out of place with the Joker or Two-Face standing in front of them. To indicate trauma and disturbance in his anti-hero protagonist, Burton does what he always does—he adorns the character with a mad-genius fright wig and a jagged lock of Elsa Lanchester’s shock-white hair borrowed from The Bride of Frankenstein. For two big scenes, Burton lingers over Todd’s reflection in front of an implausibly shattered mirror—a hoary visual cliché for the broken psyche as old as the silent-era German Expressionist filmmakers Burton reveres, and so over-familiar as a device it plays like visual parody.

Then there’s Johnny Depp—a Burton trope if ever there was one, but almost always a flexible and dexterous one. As a cine-poet preoccupied mainly with visual design, Burton has benefited greatly from his long and productive affiliation with Depp, whose sphinx-like beauty and daring as a performer frequently lend a welcome element of spontaneity to all those airless visual decisions taken at the drawing board before anyone gets to the set. Unfortunately, Depp is all wrong for the role of a man broken on the wheel of unimaginable hardship. His whippet-trim dancer’s physique and ingénue prettiness militate against the muck and grayness of the world he moves through, and his pleasant tenor voice (freakishly reminiscent of David Bowie in the way Jack Sparrow’s demeanor reminded some of Keith Richards) is simply the wrong instrument for a character Sondheim wrote as a bass-baritone, that most ominous of the masculine registers.

Depp’s acting is also and surprisingly a bit of a disappointment; the most dynamic and charismatic star of his generation seems to have run out of bandwidth here. His Sweeney is Jack Sparrow without the irony, Freddy Krueger without the laughs, and everything is played in a single tone of brooding abstractedness. Where previous Sweeneys have found room in the character for both anguish and exultation amidst all the faraway looks and obsessional glowering, Depp skirts along the edge of the emotional chasm without ever really diving in.

Despite these critical miscalculations, Sweeney Todd’ s virtues are manifold. The score is sublime—in a world where “ Don’t Cry for Me, Argentina ” is a standard, “ Not While I’m Around” and “ Johanna ” ought to be national anthems—and much of the singing is astonishingly good. As Pirelli, a rival barber, Sacha Baron Cohen makes a hilarious charlatan. Timothy Spall is startling if a bit too like Danny DeVito’s Penguin as the toadish amanuensis Beadle Bamford. But best of all is Bonham Carter’s Mrs. Lovett, a staggeringly achieved creation that is nothing short of extraordinary.

The scene where Bonham Carter goes from noticing her ward’s unhealthy curiosity about Todd to realizing that the child will have to be murdered to cover their tracks is a pristine miniature about grief, pathology and the dehumanizing impact of violence on the perpetrator, all played while singing a love song about permanent fidelity. It’s a petty social deception of a sort we all engage in wed to a sociopathic necessity out of Shakespearean tragedy. For a split second, the mask drops, and a reticent Thanatos weeps.

Down there in Mrs. Lovett’s reeking basement, Burton will subsequently pull off his best scene—a riveting blood-red ballet, where the corpses stack up and the flames belch until at last the ghosts of Buchenwald and Choeng Ek and Darfur that hover in the margins of this assembly line of death take center stage, rattle their boney and accusing fingers and grin their livid, toothy and welcoming smile. Still, for all the charnel gore on display in Tim Burton’s Sweeney Todd, nothing else from this mixed blessing of a movie lingers in the mind’s like that one moist moment of regret and realization in Mrs. Lovett’s broken-doll eyes.