close
In need of a tune-up 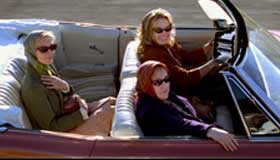 Although decent feature roles for aging actresses are scarce, Jessica Lange, Joan Allen and Kathy Bates would be better be off making an infomercial than appearing in Bonneville. This excruciatingly sappy road movie, a regrettable detour for such otherwise talented performers, borrows every imaginable cliché from the cinema of contrived situations. They play fiftysomething college friends driving from Utah to California in a 1966 Pontiac Bonneville convertible. En route, the vintage car blows a tire on the Bonneville Salt Flats. That’s one Bonneville too many for any film. Screenwriter Daniel D. Davis and director Christopher N. Rowley apparently have no shame.

After 20 years of adventures in exotic locales, Arvilla (Lange) has just lost her author husband Joe. She’s also in danger of losing their home to Francine (Christine Baranski, in familiar villainess mode), his adult daughter from a previous marriage who wants daddy’s ashes pronto or the house will be put up for sale. The only known last will and testament leaves everything to her. But Arvilla incessantly talks to the urn containing Joe’s remains, another trite concept, so giving them away is anathema. Nonetheless, she recruits fellow widow Margene (Bates) and the happily married Carol (Allen) to accompany her to the memorial service Francine is planning in Santa Barbara.

Along the way, the trio meets up with a young dude (Victor Rasuk) in search of the father he never knew, a chivalrous truck driver (Tom Skerritt) who becomes smitten with Margene and a Vegas slot machine that prompts Carol to briefly ditch her Mormon principles. The women periodically squabble but experience enough epiphanies to imbue their journey with the sort of life-changing status that the genre demands. Full of improbabilities and idiocies—a vehicle without seatbelts on a very long trip— Bonneville goes nowhere fast.