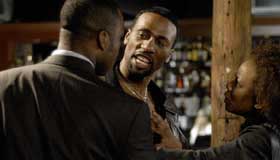 During the commentary track of R. Kelly’s Trapped in the Closet, when he reveals that the cuckolded preacher is doing it with a man, Kells turns towards the audience and nods knowingly, “Bet you didn’t see that coming.” Actually, we did, and his solemnity is the joke.

Writers Aliya Jackson and Aaron Rahsaan Thomas have generously given us a full feature of this snort-inducing melodrama about a good Baptist woman named Valerie (Aunjanue Ellis) who discovers that her Oxford-educated husband Dutch (Razaaq Adoti) is on the DL—and so are his college buddies and apparently every black man in Philly. If you don’t know what the DL is, you’ve never watched Oprah. Suffice it to say that when the priest tells Dutch to repent on his knees, I asked “Isn’t that what got him into this mess?” Besides, after the shock of the screaming violins, this hectoring drama hashes it out in several scenes with Valerie’s women’s church group at Mercy Baptist, during which one of the lady bigots refers to AIDS as “that white homo-sexual dizz -ease!” (R. Kelly prefers to call it “The Package.”)

Unfortunately, things get worse for Valerie as the movie starts with her accused of murder by an opportunistic prosecutor (Richard Gant) and detective (Louis Gossett Jr.) who’d happily fry her if it’d get them promotions. With such stratospheric stakes, it’s no wonder the film’s brain seems to lack oxygen. Valerie’s insistence that she’s “a Christian, not a murderer,” provokes both snickers and the dulling knowledge that she’s going to get proven right. Approached as comedy, Cover is a riot. Buy director
Bill Duke’s stance that it’s a serious morality play, and you’ll be so annoyed by his Filmmaking 101 stridency (not to mention its seemingly shot-on-cellphone cinematography) that you’ll miss out on the pleasure of giggling at Vivica A. Fox’s man-hating sista, Paula Jai Parker’s unhinged dragon lady, and Leon’s (yes, just Leon) debaucherous R&B star, plus the second-tier soap opera narration like “Philadelphia was a place where all my dreams would come true—it never occurred to me that nightmares are dreams, too.”