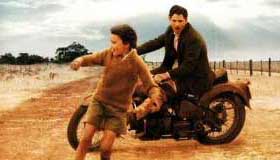 This directorial debut by Aussie actor Richard Roxburgh is a beautiful mediation on the struggle of immigrants in Australia and the power of the father-son bond. Psychic trauma reverberates through this tearjerker, but Roxburgh is smart enough not to let the story devolve into sappy bildungsroman. The film is accessible and easy to fall into, and could enjoy a really strong audience stateside with the right marketing.

Rai (Kodi Smit-McPhee) lives with his father Romulus (Eric Bana) in Frogsmore, Victoria. Romulus is looking forward to sending Rai to an expensive school with the money he makes as a blacksmith, hammering elegant furniture. Comfortable if somewhat isolated in their home, the team’s father-son bond is shaken with the surprise return of their errant mother/wife Christina (Franka Potente). Though it’s clear Romulus and Rai keep each other well, the appearance Christina resurrects Rai’s longing for a mother, regardless of how inept that mother is at caring for him. Only content with a fling, Christina leaves Romulus and Rai, and we learn she’s gone to move in with her new lover Mitri (Russell Dykstra). Within a short time the two are expecting a baby. In support, Rai goes out to help the couple with their infant, only to learn that his mother is even more incompetent than he’d imagined. When Christina is finally successful in one of her many attempts on her life, Romulus falls apart and is committed. Rai has to survive alone on the land, with none but a local troglodyte to help him.

Roxburgh is successfully minimal with his imagery and makes a simple but far from facile parallel between the changing landscape and Rai’s survival-like coming of age. Intelligently, we leave Rai as a child, still wounded if wiser for it.

Based on the memoir of writer Raimond Gaita, Romulus, My Father begins in 1960, as Rai and his father Romulus resurrect a handful of bees using a light bulb. It’s a magical moment, the stuff of childhood, and it presents the film with its central theme. For as many times as these characters are wounded, for as many times as they try to take their own lives, they each care for each other and without that unity, they couldn’t be revived, by sun or by fire.