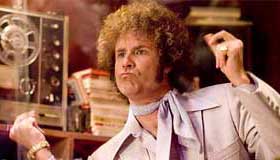 The formula for a Will Ferrell comedy, say critics, is becoming painfully obvious: Pick an offbeat occupation, usually in sports, add a funny hairstyle and silly name and unleash Ferrell. Comedy ensues. Or not.

However oversimplified that assessment, it is basically accurate, though it overlooks something fundamental about Ferrell’s brand of satire. What’s crucially common to the films that fit this formula — including Anchorman: The Legend of Ron Burgundy, Talladega Nights: The Ballad of Ricky Bobby and Blades of Glory —is a keen sense of pop-culture religiosity and a shameless willingness on Ferrell’s part to mock those parts of our cultural past (or present) that others accept as either routine or comedically untouchable. That Ferrell comports himself without the least hint of malice or guile is a key factor, enabling him to get away with just about anything, no matter how coarse or potentially offensive. In short, he’s a big goof, a lovable lunk and an immensely gifted improv artist. Precisely the kind of actor every comic filmmaker craves.

In Ferrell’s career, however, those attributes have proved a double-edged sword—generating comic brilliance in the hands of writers and directors able to harness and sculpt them accordingly, and falling flat when mishandled by those working with substandard material or too great a reverence for Ferrell’s gifts.

Despite some inspired moments, Semi-Pro falls closer to the latter camp than the former. The premise is undeniably appealing, taking its cues from that moment in the 1970s when the troubled American Basketball Association (ABA) prepared to merge four of its teams—the Pacers, Spurs, Nuggets and Nets—into the NBA before ceasing all other league operations. As the player/owner/coach of the fictitious ABA Flint Tropics franchise, Ferrell’s Jackie Moon protests the arrangement, demanding that he be given a chance to drag his last-place team into one of the top four spots, thereby earning a chance at NBA glory. The league reluctantly agrees and Jackie goes on a madcap promotional rampage, bringing in an aging ex-NBA guard named Monix (Woody Harrelson) to improve team play while Jackie uncorks an extravagant series of ridiculous publicity stunts to improve attendance.

The movie’s high points are sparse—Jackie’s hilarious disco-anthem “Love Me Sexy,” André Benjamin as flashy star player Clarence “Coffee Black” Withers, a smattering of familiar supporting actors (Andy Richter, Will Arnett and some cameos from Saturday Night Live personnel) and, of course, some priceless Ferrell non-sequiturs. But the tandem of writer Scot Armstrong ( Old School, School for Scoundrels ) and producer-turned-first-time-director Kent Alterman proves the film’s undoing, with Armstrong’s threadbare assemblage of disjointed gags further dissembled by Alterman’s surprisingly poor grasp of comic timing and pacing. Improvs drag on endlessly, promising scenes are too long or too short and any sense of comedic rhythm, either within scenes or the film at large, is nonexistent.

Ferrell fans should still find a few nuggets—“Love Me Sexy” is just about the funniest movie song since Mel Brooks wrote Blazing Saddles more than thirty years ago — but broader appeal beyond a strong opening weekend seems as unlikely as a Clipper championship.