close
Mercurial family drama set in the most stoic of landscapes 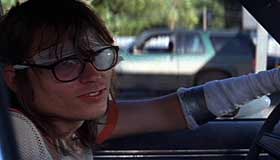 Son (Michael Shannon) is the eldest and most mature of three brothers. Kid (Barlow Jacobs) and Boy (Douglas Ligon) have followed Son like a surrogate father and so appear in a state of arrested development. They live in a tent and a van either on or near to Son’s modest property. Their lamentable names are the result of a wayward father and a hateful mother. In the first act, their bitter mother alerts them of their father’s passing. Dad left their family to get sober, remarry and live a happy, productive and successful life with a tidy Christian family. He traded his Son, Kid and Boy for five well kept, properly named men. Son sees his father’s funeral as an opportunity to voice his grievance, but his angry and restrained statements at the funeral inspire the ire of his half-brothers who launch into a family feud with very violent results.

This is the little indie that could. Well, for early 2008, anyway. And this isn’t a statement to rank the film among a growing list of struggling but competent small-budget pix that speak to “the American sensibility.” Shotgun Stories is genuinely breathtaking and stands out from the herd. It’s bracing and quiet, simple but still profoundly intelligent and emotional without wearing anything on its sleeve. The style speaks to the legacies of Linklater and Jarmusch without the involvement of philosophy, irony or dramatic outburst. The men in this film are a believable rendering of the “strong, silent” men of lore. In that and many other capacities, they’re just like Ken Anger’s secular gods. They’re mythic in no uncertain terms. I’d swear Jeff Nichols is the directorial reincarnation of William Faulkner—just reset in Arkansas.

Ben Nichols and Lucero’s original music is perfect and supports the stoic silences of the characters and their landscape effortlessly. The film has an overall symmetry that’s captivating and a sense of sadness that hard to shake for days after you watch it. There Will Be Blood 2 notwithstanding, the 2009 Oscars may very well buzz with the name Jeff Nichols.