on February 21, 2008 by Shlomo Schartzberg
Print 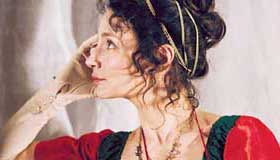 Jacques Rivette, one of France’s most original filmmakers, stumbles with his latest feature from a novella by Honore de Balzac, a period drama set in mid-19th-century France and Italy that is stopped dead by the one-note performance of Guillaume Depardieu. Depardieu has the pivotal part of a career soldier, General Armand de Montriveau, whose passion for the married Duchess of Langeais (Jeanne Balibar) leads to heartbreak and tragedy for both of them.

Rivette, however, is less interested in the classical tropes of obsessive relationships—this is defiantly not his take on a tragic love story like Francois Truffaut’s The Story of Adele H. —but more in the way people lie to each other, toy with each other and fail to articulate how they really feel abut their supposed loves, until it’s too late. That type of frustrating pas de deux requires delicate and subtle performances to make the film work, but neither Balibar, who comes across as vapid more than anything else, nor Depardieu, who is unable to bring forth de Montriveau’s inner demons, are up to the task of doing so.

It’s odd because Rivette, in movies like La Belle Noiseuse and Va savoir, excels at depicting interesting people acting in stimulating and tantalizing ways. The Duchess of Langeais, however, is more often stillborn than enticing and basically plods along from one dull scene to the next. Rivette is smart enough to point out, through the use of clever intertitles, how silly his protagonists may act, especially to our modern sensibilities, but he fails to embellish his story with the wit and style necessary to indelibly impress that provocative view upon his willing audience.