close
An opulent pretender to the throne

The Other Boleyn Girl 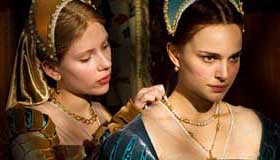 Based on the novel by Philippa Gregory, the plot of The Other Boleyn Girl concentrates on the court rivalry between Mary (Scarlett Johansson) and Anne Boleyn (Nathalie Portman), the sisters who fought over King Henry VIII (Eric Bana) with ambitions to be queen.

At the tender age of 14, Mary becomes the king’s lover and the couple have two children. However, sister Anne comes between the lovers and thrusts herself into the power position. The film follows the tale as the women fall in and out of favor with the king and his court and eventually both share the royal bed. Behind the scenes, their father Thomas Bolyen, played by Mark Rylance, and their uncle the Duke of Norfolk (David Morrissey) conspire in the intrigue while their mother, a haughty Kristin Scott Thomas, glowers from the sidelines in disapproving mode.

This should have emerged as a sensual tale of intrigue, romance and betrayal set against the backdrop of a defining moment in European history that eventually led England down the road to its break with the Catholic Church. Unfortunately, Justin Chadwick’s film lacks the epic sweep of even an Elizabeth: The Golden Age and becomes mired in the machinations of plot detail. The script by Peter Morgan ( The Queen and The Last King of Scotland ), not only lacks clarity but also any spark of real verve.

Still, its opulent period settings and costumes look good and Johansson and Portman make well matched sparring partners and conspirators. Their names on the marquee alone should ensure a healthy interest beyond the followers of historical sagas.