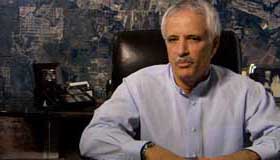 What is utterly Unforeseen here is how powerfully poetic this debut doc from Dunn, whose big-name backers include executive producers Terrence Malick and Robert Redford, is—literally.

The aerial shot of the rapidly rising steel skeleton of the Frost Bank Tower in Austin that opens The Unforeseen —the ominous manner in which it looms over the Texas Capitol an all-too-telling illustration of the relative roles of commerce and democracy in modern-day land development—is accompanied by Wendell Berry’s rich reading of his “Santa Clara Valley,” the poem that inspired the film’s title.

Beginning as an intimate portrait of Gary Bradley, the now-fallen developer of a subdivision that threatened the beloved Barton Springs in Austin, The Unforeseen ultimately transcends that personal-level perspective to become a visually compelling cinematic contemplation of unchecked growth, in general, and its impacts on our water supply, in particular.

“When I’m at my best, all I need is water. I can’t make water,” Bradley declares during one interview. “The rest, I can handle.”

Some of the best lines, however, belong to Redford, who has fond memories of swimming in Barton Springs as a child. Why, he wonders, would elected officials allow a community treasure like this to be threatened by outside developers whose only interests are financial?

“When that profit evaporates, what’s left but a scar and a memory?” Redford asks. “Certain things should just be left off the table.”

With her first full-length feature, Dunn demonstrates a storytelling style that the directors of drier documentaries—say, An Inconvenient Truth ’s Davis Guggenheim—should try to soak up.