close
No matter what the Vantage Point, this still looks like a big-budget mess 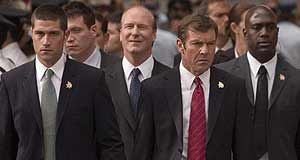 Dennis Quaid is the most trusted Secret Service agent to William Hurt’s President of the United States of America (the entire title is required). He even once took a bullet for him and is perhaps still kind of skitzy about the whole thing. He sweats a lot and sees assassination attempts around every turn. All of which is handled quite clumsily in the back story revealed by the wholly ancillary sassy reporter (Zoe Saldana) and “GNN” TV producer (Sigourney Weaver), as they chatter aimlessly in preparation for the arrival of said President for a peace conference in the pastoral city of “Somewhere in Spain.”

If these were the only clumsy bits of writing and acting and bad filmmaking in this silly big-budget mess of a movie, it would all still be awful. As it is, the handling of the entire film is this contrived and the conceits of the filmmakers reach much farther and wider, delving not only into contemporary geopolitics that they reduce to simple polemics, but also into the personal demons that drive terrorists and such to do the things they do, without actually mentioning any of those reasons, save vague references to “our struggle.” The mélange of terrorist is equally contrived. They range from the Arabic sorts to a lovely yet cold Spanish woman one supposes represents the Vasco separatists of southern Spain, and one white American male, apparently leading a “double-life” if the dialogue is to be believed. Timothy McVey notwithstanding, it’s all too ridiculous for even the make-believe world of movies.

Here, the President is shot while giving a speech and in Rashomon -like style the filmmakers literally rewind the tape and show us the events no less than six times from differing vantage points, adding a bit more of the puzzle to each redundancy until the whole pointless story is complete—yet no better.

There is a chase sequence.

If there is an interesting reflection on Vantage Point it is that its mix of quasi-progressive rhetoric (Hurt’s President actually says something about having “the sympathy of the world” and not blowing it, at some point), and incoherent right-wing acts of aggression (most of the officials in fact shoot first, and ask questions later) could come from any quarter of the American political spectrum.

From that standpoint, it is notable that at the end of this movie it would be perfectly plausible for voiceover from the appropriate candidate to retort: “I’m John McCain—or Hilary Clinton—and I approve of this movie.”