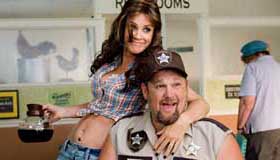 “I know these roads like the ingrown pimples on my ex-girlfriend’s front butt!” boasts Sheriff Larry (aka The Cable Guy) minutes before running his truck into a rock. Hilarious? If yes, stop reading now and get thee to a multiplex. (By saving the time it’d take you to read this review, you could already be in line for popcorn.) Okay, now that the yokels have left the building, who are these people funding Larry’s bass-ackwards schtick through two movies and a Christmas special in the last nine months alone? Larry may be belching all the way to the bank, but as he schools an uppity state’s witness named Madeleine (Ivana Milicevic), “Having money ain’t the same thing as having class.”

Against her morals and sense of smell, the languid and easily repulsed Madeleine’s under Larry’s protection from a gang of dudes in black suits headed by her ex-husband—and defendant—Arthur Grimsley (Peter Stormare, only faintly committed to his British accent). But really, all this jurispru-whazzit is just an excuse to prove the superiority of Larry’s horse sense over the citified rubes. For example, he’s better at navigating through a barn of pigs. And twice he uses a fart as a weapon. Writer-director Charles Robert Carner believes every bad situation can be analogized to a region under Larry’s boxers, and if you don’t find that hilarious than you’re just part of the 98 percent of America Larry disdains. Like reds, he hates snobs and liberals; like blues, he’s suspicious of the NSA. Classical music, rap and wheatgrass make him vomit and his, ahem, jokes, target everyone from Michael Vick to Hillary Clinton to Angelina Jolie’s “jungle pygmies.” Do his fans—assuredly bitter, powerless men in dead-end jobs who can’t afford a tent to stake on the lawn of Larry’s mansion—laugh at their hero when he calls a mild-mannered, Middle-Eastern hotel clerk (played by east-Indian actor Garry Bednob) “Pamper-head” and threatens to turn him into Gitmo? Or do they laugh with vindication when said clerk’s eyes light up at Larry’s fake grenade? (I couldn’t tell, as in my theatre, no one laughed at all—then again, only one other person was there.)

The only human treated with reverence is a small boy at a (literally) Main Street USA parade who sells Larry and Madeline lemonade in a Stars-N-Bars cup for a quarter. (Standing behind the wholesome tyke, his pregnant mom wears a shirt with an arrow and the words “Future Marine.”) Touched, Madeline smiles at Larry like she’s disregarded that only scenes ago, she was barking “Why do I bother with a man who keeps a possum in his glove box?” We, however, haven’t forgotten and exit still waiting for an answer.