close
Emmerich's latest, per usual, is big on spectacle and short on brains 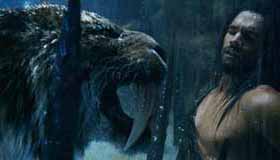 Unlike other films in the regularly kitschy caveman genre, Roland Emmerich’s take on this “age of myth and heroes” takes itself so seriously it forsakes reason for sentiment. Certain aspects are effecting and the almost Marxist climax is spectacular if oddly fashioned. The sheer spectacle of the film makes it an easier sell on the big screen than on DVD, though editing does feel oddly segmented, as if to fit comfortably with commercials.

Roland Emmerich has developed a reputation for broad-based action epics, characteristically big on bombs and small on character. Though 10,000 B.C. is prey to the same weaknesses as his other movies, it’s head and shoulders above them.

D’Leh (Steve Strait) fell in love with Evolet, “The Blue-Eyed Girl” (Camilla Belle) young in life. Through a series of events that seem more happenstance than fated, Evolet is stolen by nomads on horses. These “four-legged demons” are bringing a conquering fist to the unadulterated cultures of the West. Presumably (given the continental drift), D’Leh and his supporters walk from South America to Egypt to retrieve their stolen countrymen. As they walk, they come upon tribe after tribe who have also been stripped of their families. Strangely chaste, the slave drivers kill the dissenters, steal the docile and get the hell out of Dodge. (No looting or raping whatsoever.) As D’Leh shows his capacity to lead and finds his way into many legendary and ineffable circumstances, he ends up leading a large army of men from various tribes, inciting slave revolution and overthrowing the false deity who mesmerizes and oppresses them.

This film is so riddled with anachronism it’s destined to become a drinking game for anthropologists. To most (who, like me, remembers maybe $20 worth of college anthro) the historical inaccuracies are comical but otherwise inoffensive. At times, these awkward spots are like pure, unintended camp, which works contrary to the agenda of the film, and does temporarily take you out of the ride, but exactly how into the ride can you be? At one point, the hunter/warriors suffer an attack by giant, carnivorous dodo/ostrich birds—a sure-fire example of the generally impoverished logic in the film. In fact, you can’t call this paint-by-numbers melodrama predictable, because to be such it would have to follow natural logic. The film intends to sweep you into a world of legend from the start and any sojourns into the effective history of human civilization are only accidental. If it is a history lesson you want, you’d do better to go looking for it in the Sunday comic B.C.

Between the slave-driving easterners and 300 -inspired battle sequences, segments of 10,000 B.C. come shockingly close to making a comment on the nature of war. Yet, in favor of opiate-like qualities of myth, we never actually delve into the matter. The overthrow of a self-proclaimed god, and the contradiction of many different (if interconnected) prophecies could have bordered controversy, but they don’t. The union of many lesser-developed tribes to stop the advanced civilization from being a super-power-cum-bully could very easily be read as political commentary, but it isn’t. In fact, Emmerich uniformly eschews all the facets of message-making that could have emboldened his film with value and meaning. I take it back: Perhaps there is a history lesson to be found here.