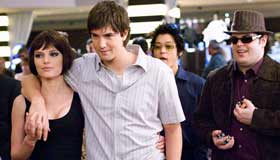 The studio says “hit,” but the audience might want to “stay”—at home. Not a big winner, although not entirely a bust, either, this so-so fictional feature film is adapted—loosely—from the nonfictional bestselling book Bringing Down the House. It doesn’t take one of its Vegas-loving MIT students to calculate that the (screen) count is in its favor on opening weekend, but don’t expect its luck at the box office to last too long.

“You know what’s worse than a loser?” Micky Rosa (Kevin Spacey) asks his shamefaced students after a disastrous night at the tables. “Someone who won’t admit that he played it wrong.”

Ironically, that criticism might also be leveled at the filmmakers, and Spacey had a place at that table as one of the producers of 21. While the two-time Academy Award winner’s portrayal of a card-counter-turned-math-professor is frequently funny, it’s also an example of the inconsistencies of tone that—along with the spottier accents and characterizations of his junior co-stars—squander what ought to have been a winning hand.

Speaking of spotty accents, British thesp Jim Sturgess stars as Boston townie Ben Campbell, a pre-med student who’s earned a 4.0 at MIT but can’t afford to attend Harvard Medical School. After an admissions official there tells him that to win the necessary full-ride scholarship he’d need life experience that “leaps off the page,” Ben conveniently catches the eye of the statistics-and-probability prof who happens to be the coach of a covert card-counting club.

Initially leery, Ben is tempted into joining by both the opportunity to earn the hundreds of thousands of dollars it takes to attend Harvard Med and the chance to spend time with the gorgeous genius Jill Taylor (Kate Bosworth). Besides, he reasons, counting cards isn’t illegal. As he soon learns, however, it is strongly discouraged—particularly by the likes of Cole Williams (Lawrence Fishburne), a casino “loss-prevention specialist” who has history with Micky.

Similar to the caper he’s shooting, Legally Blonde director Robert Luketic’s plan doesn’t exactly go off without a hitch. His attempts to up the ante on slower sections by cutting in flashforwards to the more “thriller” chase sequences and backroom beatings that ensue once Cole catches up with the card counters inadvertently draw attention to the undistinguished “drama” sections of 21. Especially tepid is the romance between Ben and Jill, the latter of whom swears early on that the two will not get involved but then seduces the former after nothing of note has happened except the passing of what the screenwriters presumably believed to be a sufficient number of script pages.

It’s an approach to filmmaking that brings to mind Ben’s frequent refrain “it’s just simple math,” but it’s one that doesn’t quite add up.