close
Backseat will strike a chord with art house audiences 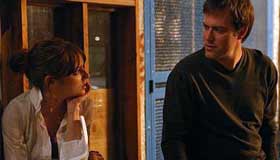 One of the running gags in the indie dramedy Backseat revolves around its road-tripping principals’ frequent stops to relieve themselves along the side of the highway. But despite the images on the screen, 30-ish slackers Ben (Rob Bogue) and Colton (Josh Alexander) aren’t merely “taking the piss” as everyone else speeds past them in cooler cars. There’s an authenticity to the unexpressed emotions underlying the often-awkward exchanges and silences between these two newcomers that will likely resonate with arthouse auds in Backseat ’s initial, limited theatrical run—although ancillary markets seem to promise better returns.

Despite the title, Alexander—as screenwriter and producer—is actually in the driver’s seat for his silver-screen debut, which has been barnstorming the film-fest circuit since premiering at Austin in 2005. His Colton is a lackluster actor who agrees to smuggle a brick of coke across the Canadian border in exchange for the chance to audition for a bit part in a studio prison pic. Recruited to be the driver is his straight-arrow best bud Ben, who thinks Colton’s primary reason for wanting to travel from New York City to Montréal is the prospect of meeting his idol, Donald Sutherland.

But Ben, a bookish shy-guy who has spent his late 20s looking for work rather than actually working, has his own reasons to want to leave town—primarily the revelation that his girlfriend Shelle (Aubrey Dollar) sees no reason to remain monogamous. (“Not fucking other guys was never part of the deal,” she declares.) When Ben finds the drugs in the glove box of the broken-down gas-guzzler they’ve borrowed for the trip, he’s sure that Colton is destined to go from auditioning for a prison movie to actually serving time in Attica.

To be sure, slapstick misadventures ensue, but there’s a sweetness and vulnerability beneath the surface of the boys’ sometimes-blue bantering. “I might be crude, but at least I’m original,” Colton points out to Ben. The same might be said for the modest movie that the actor who plays him has written and produced.