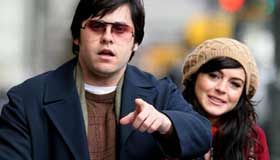 Painfully slow, dreary and speculative, this look at what thoughts ran through the twisted mind of Mark David Chapman in the time leading up to the 1980 murder of John Lennon fails to be convincing on just about every level. This low-budget independent movie, with its dogged interior focus on just one unsympathetic character, feels and looks hopelessly claustrophobic. Finally getting a limited U.S. release after spinning its wheels in foreign markets and on the festival circuit (beginning at Sundance 2007),

Clearly star Jared Leto, who has one of the film’s ten producer titles (what did they all produce ?), saw this as his Monster —a chance to physically transform himself into the soul and body of an infamous killer and perhaps gain critical and awards recognition in the process. In several of the film’s more dismal sequences, he seems to revel in letting the camera slowly pan his bloated, rippled body fat which, in De Niro fashion, he added for the part. But looking just like the diet-challenged Chapman doesn’t make it better, and the affected performance isn’t helped by an annoying vocal drawl he has unwisely employed to interpret writer/director J.P. Schaefer’s simplistic dialogue. Schaefer and Leto seem content to let endless voiceover monologues define the famed Beatle’s killer for the audience, thereby diluting any potential impact the movie could have had in more capable hands.

Reasons for making the film are dubious in the first place, though, as the moribund story simply places this disturbed loser either in his small hotel room or lingering in front of The Dakota, where Lennon lived. Basically, we learn this is one screwed-up dude whose obsession with the book The Catcher in the Rye and the feeling he is really Holden Caulfield seem to overtake all reason. Schaefer’s version imagines what Chapman must have been thinking in the weekend leading up to the murder, and recreates encounters he supposedly had with people like Lennon’s personal assistant, the building’s doorman, a photographer and, briefly, Lennon himself when he gives him an autograph. He also hooks up with another fan, Jude (played with welcome restraint by Lindsay Lohan), who at one point even introduces him to Lennon’s son Sean as he is out for his daily walk with his nanny. Unfortunately, their relationship, like the film itself, goes nowhere and does nothing to make this more than a rather pedantic one-dimensional look into the mind of a very sick person.

The inevitable sequence in which the killing takes place is so hazy and stylized that it seems anticlimactic, and the aftermath and later emotional outpouring for Lennon is simply glossed over in favor of keeping the film’s one-track mind on Chapman. If there is any good reason for an audience to spend an hour and a half wallowing in the psychotic reveries of this wayward young man, the filmmakers and their star have sadly failed to provide it.