close
Chow's latest may only be for die-hard fans 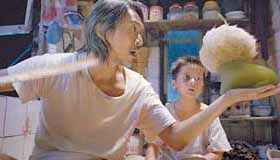 Like Jackie Chan and Jet Li, Hong Kong’s Stephen Chow Sing-chi didn’t hit it big in the U.S. until fairly late in the game. His CGI-laden escapades in 2001’s Shaolin Soccer and its 2004 follow-up, Kung Fu Hustle came on the heels of some five dozen other films that kept him well ahead of Jackie Chan and Jet Li in hometown popularity throughout much of the ’90s. But whereas his earlier efforts relied on Cantonese-language puns and wordplay along with a smattering of slapstick, Chow’s more recent films have tended to travel extremely well thanks to their heavy reliance on cartoonish special effects.

Judging from Chow’s latest, the peculiar CJ7, it seems clear that he misses the old, but can’t quite let go of the new, resulting in an odd and sloppy grab bag of bits and concepts likely to appeal only to hardcore fans while leaving others scratching their heads.

Inspired by Chow’s own love of Steven Spielberg’s E.T., the new film stars 9-year-old Xu Jiao as Dicky Chow, a poor boy whose days are spent largely at the mercy of bullies at the private school he’s able to attend only because his hard-working father (Stephen Chow) is determined to make a better life for his son. Unable to buy anything for his boy, dad does most of his “shopping” at the local dump, where he one day happens upon a bouncy orb left behind by a flying saucer. Believing it some sort of toy, he brings it back to Dicky, who triggers its awakening into a kind of alien dog, complete with power-zapping antenna.

The critter—which he names CJ7 after a line of Japanese-made toys—is really more like a Pokemon with the head of a tribble, a design that underscores the film’s Asian origins. Though Dicky expects the creature to magically remedy his plight at school, the reality is that CJ7 isn’t much more than a funky-looking dog  or so it seems. As always, things start to brighten just when they are most dour, guaranteeing a handsome set of unexpected life lessons that will forever transform Dicky’s future.

Were it not for Chow’s other recent successes, it’s unlikely that Sony Classics would have gotten anywhere near this film. “From the Makers of Kung Fu Hustle “ obviously carries a great deal of marketing weight and could well bring in sufficient numbers to offset the film’s purchase price, but so-called “legs” will be hard to come by as audience word of mouth cuts them short. Sentiment and silliness are common bedfellows in Asian comedies, particularly Chow’s, but minus the high-concept hijinks of Kung Fu Hustle, CJ7 won’t do much more than reinforce the notion of foreign films as objects of similarly alien origin.