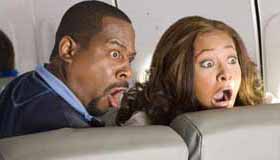 Banking as much on the antics of a precocious pet pig as tween megastar Raven-Symone College Road Trip is an amiable father-daughter charmer that teeters into total eye-rolling slapstick. Martin Lawrence, neutered, mugs and hugs his way through a family-friendly comedy with random absurdist touches from director Roger Kumble ( Cruel Intentions, Just Friends ). As potential auds charge ahead into the senioritis stretch, dads and daughters will be looking at each other with suspicion wondering which one will drag the other into the multiplex for some pre-fab bonding.

Police Chief James Porter (Lawrence) settled on his baby girl’s college when she was still in diapers: Northwestern is tough, world class and, most importantly, a mere 28-minute drive from the homestead. That nerdy, but strong, Melanie (Raven-Symone, looking like a talk show host who graduated last decade) has her heart set on Georgetown is no cause for alarm—until James realizes that she and wife Michelle (Kym Whitley) might actually rebel and send her to a land of books, booze, and boys 700 miles away from his fancy surveillance equipment. And so the two, along with stowaways Trey (Eshaya Draper), Melanie’s mad-scientist little brother, and the family’s genius piglet Albert, set out on a college trip, making several pit stops for bonding.

James’ outlandish ruses to make his firstborn a Wildcat (director Kumble’s own alma mater) are fun; the push-pull parent-child dynamic generic, but sweet. But for the first two-thirds of the flick, writers Emi Mochizuki, Carrie Evans, Cinco Paul and Ken Daurio’s comedy failsafe is “Cut to the pig!” Said porklet dances, backflips, flushes, solves Rubik’s Cubes, plays chess in the bathtub, and hates James (though that last plot point is too soon dropped). Yes, he belches, but that no gas comes out his other end makes Kumble the paragon of restraint.

Refusing to compete with a swine, Raven-Symone’s chillax everygirl vibe won’t alienate her fan base. The diva scene where she cuts loose for a bodacious cover of “Double Dutch Bus” makes you wish she’d tried harder to win friends and influence people. For his part, Lawrence works sincerely to distance himself from his less-lucrative arrest record and an irreconcilably creepy scene where James sneaks into a sorority house to sleep under the bed of Melanie and best friend Katie (Margo Harshman). (The big reveal is that he learns she’s more interested in talking about lip gloss than sex.) Despite the flick’s goodwill (who doesn’t want to like a film that says education is cool?) by the time dad and daughter skydive to her admission interview, the 85-minute film is running out of ideas, though the ELO soundtrack wins a few brownie points. And it’s no backhanded compliment that the (two-legged) breakout star is Donny Osmond, who with the hilarious Molly Ephraim, plays an obnoxiously chipper father-daughter team into argyle and Broadway musicals.