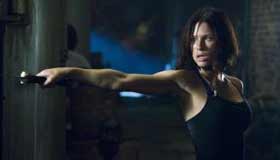 Lack of media pre-screenings and minimal marketing support usually indicate trouble but Writer/Director Neil Marshall’s entertaining, sorta-cheesy, if at times derivative homage to post-apocalyptic cinema delivers exactly what action fans of the genre crave. Premise revolves around the return of a deadly virus that nearly destroyed the British Isles circa 2008 and is now threatening to finish them off 30 years later unless an antidote can be found. Clearly aiming for the same crowd that craves I Am Legend, Mad Max, Resident Evil, 28 Weeks Later and all their spawn, this fast-paced exercise in non-stop gore failed to deliver the goods in it’s weak $4.9 million dollar opening weekend but should play considerably better internationally where this British-accented programmer ought to make up the deficit.

Although not wildly original, Doomsday tells the story of a deadly virus called the Reaper, that devastates much of Scotland and forces survivors into inhumane quarantine behind an impenetrable wall, essentially leaving them for dead. Fast forward to 2035 where the return of the virus now threatens London, cuing the entry of a ballsy, one-eyed army major named Eden Sinclair (Rhona Mitra) who is enlisted by her superior (Bob Hoskins) to invade the forbidden “hot zone” and find the man named Kane (Malcolm McDowell) who leads the resistance and may possess the only cure to save England. Once she gets to the other side with her own band of warriors she discovers a society that looks like a group of aging punk band members (led by a guy named Sol(!)), costumed in the now de rigueur leather outfits customary for life in a post-apocalyptic world (at least according to the movies).

Caught and imprisoned by her overly zealous captors, Sinclair can only listen from her cell as one of her colleagues is grilled and served up “medium rare” for the loud music-loving cannibalistic crowd that revels in watching him tortured before carving him up for an all-you-can-eat buffet. This only makes her more determined to escape, which she manages to do with, as it turns out, Kane’s imprisoned daughter.

Cut to a King Arthur-style castle setting where Eden is led directly to the man of the hour. Turns out he is not as useful as first thought, but with his immune offspring still in tow she has more than a few tricks still up her sleeve. The final car chase is spectacular and an amusing, if super violent, climax promises endless sequels.

Whether the ever-watchable Mitra (ironically now shooting an Underworld prequel) gets to follow in the footsteps of fellow Brit, Kate Beckinsale or Milla Jovovich and franchise this testosterone-driven femme fighting machine, of course depends ultimately on worldwide interest in a film that may just be perceived to be a little too much ‘been there, done that’ for the majority of moviegoers. Nevertheless you can’t say Marshall, with sharp direction, first-rate production values and a strong sense of B-movie fun, didn’t give this thing a game try.