Dr. Seuss' Horton Hears a Who! 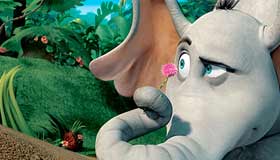 After enormous box office success with a live action version of How The Grinch Stole Christmas and a critical drubbing with Mike Myers’ The Cat In The Hat, Dr. Seuss has finally been CGI’d for this big-screen version of his classic Horton Hears a Who!, seamlessly blending the charming Seussical brand of wit and wisdom with animated thrills today’s movie audiences expect. Blue Sky studios, the creative team behind the Ice Age franchise has taken a beloved book and made it sing using state-of-the-art animation techniques, a smart script and an all-star voice cast including Jim Carrey, Steve Carell and Carol Burnett. With little competition for family audiences and the pre-sold elements of the film and its filmmakers, Horton should be hearing some “who-ge” grosses all through spring.

The general story hasn’t changed much since the book’s initial 1954 publication and even a cartoon TV special in 1970, but the tone in Cinco Paul and Ken Daurio’s screenplay is bigger, louder and a little hipper than previous incarnations (a reference to Apocalypse Now has one monkey character offering, “I love the smell of bananas in the morning”).

Plot revolves around Horton (Carrey), an amiable and curious elephant who hears a barely audible cry of distress coming from a tiny speck of dust that turns out to be from the city of Who-ville, populated by the miniature Whos, and specifically the embattled Mayor (Carell). Establishing a relationship in earshot to the Whos, Horton is belittled by all his neighbors who think he must be smoking something and refuse to believe his imagination hasn’t conjured up this whole tale.

Horton remains convinced he must save the “speck” as he repeats his moralistic mantra, “a person’s a person, no matter how small” and that an elephant is “faithful, 100 percent.” With life lessons like these, the entertaining travails of Horton and his Whos also manage to offer the target kid audience a meaningful message that fortunately doesn’t get in the way of the fun.

The best parts of the film involve the villainous and bossy kangaroo (Burnett) who tries to stop Horton in his tracks, first employing the help of the Wickersham monkey clan and then handing over her dirty work to her hired gun, Vlad (a hilarious Will Arnett), a large, Russian-accented, butt-ugly eagle who between spouting off lots of pop-culture-isms is eager to handle the job of doing Horton in.

Colorful action sequences and suspense ensues as the fate of Who-ville rests on Horton’s trunk and his ability to fend off his considerable detractors both inside and outside of the tiny town.

Carell is perfectly cast as the beleaguered Mayor and its fun to see Burnett get her chops into the deliciously menacing Kangaroo, but it’s Carrey returning to the land of Seuss he mined so successfully as the live-action Grinch whose vocal work really stands out as the sweet, loopy but determined pachyderm with a heart as big as his ears.

Top notch direction from Steve Martino ( Robots ) and veteran Pixar animator Jimmy Hayward makes full use of modern CGI wizardry to create a sparkling ’toon that ought to have the family crowd lining up.