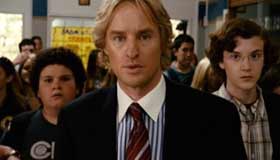 A rare foray into PG-13 territory for the Judd Apatow raunch machine finds three nerdy high school freshman signing up with a questionable bodyguard for help in dealing with a menacing senior out to terrorize them. With a bright script, a perfectly cast Owen Wilson in the title role and producer Apatow’s usual sharp eye for discovering kids who look and act like the real thing, Drillbit Taylor mixes big laughs with a lot of heart and should appeal not only to its young moviegoing target but also to a sizable number of nostalgic adults who will also relate to its time-honored universal premise pitting a ragtag group of underdogs against the big, mean campus bullies.

Actually, this comedy in some ways could be considered a prequel to Apatow’s summer smash, Superbad, which like Drillbit, was also co-written by his Knocked Up star Seth Rogen (joined here by Beavis And Butthead scripter Kristofor Brown). Instead of focusing on the final moments of the high school experience for three nerdy friends as in Superbad, Drillbit shows how the first frightening days on campus can seem more like entering Iraq than an institution of higher learning. Three newcomers, including the pudgy Ryan (Troy Gentile), super skinny Wade (Nate Hartley) and wide-eyed, screechy-voiced, fear-driven Emmit (David Dorfman) are immediately tagged for “execution” by an obnoxious older student, Filkins (Alex Frost), whose non-stop agenda of terror makes him more of a candidate for al-Quaeda than for the honor roll. After a series of humiliations, the three victims set out to hire a “low-budget” bodyguard to protect them from further assaults. Enter hapless Drillbit Taylor (Wilson), who comes off as a mercenary-for-hire but really is a homeless loser-in-life out to make some quick money and take advantage of his new very naïve employers.

What follows are some richly amusing boot-camp-like training sessions finally leading to his spruced-up emergence at the school going undercover as a substitute instructor. In no time, the flaky Drillbit forgets his mission and becomes romantically involved with another teacher (Leslie Mann) until complications arise and his whole operation “protecting” the kids is threatened.

High school comedies are a well-worn genre, but director Steven Brill and Apatow and company manage to make this one completely fresh, even without the usual R-rated language and gags the producer has become known for. Drillbit would be right at home in the TV world of Apatow’s one-season wonder Freaks And Geeks (a show that has informed so much of his later work), so much so that the toned-down dialogue in this outing would have little problem passing censors on any network. This somewhat cleaned-up Apatow shouldn’t be a problem for his core audience, though, as Drillbit Taylor takes a premise built on a group of disparate losers and turns it into a hilarious winner in every way imaginable.

With kids able to buy a ticket directly (rather than sneaking in), look for lots of loot and strong word-of-mouth among the teen set. To quote the film’s ad-line, “you get what you pay for,” and in this case, that’s a surprising and uproariously funny comic bull’s-eye.