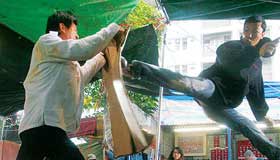 Mixed martial arts (MMA) is all the rage these days, and cops versus robbers never goes out of style, especially in the Hong Kong film industry. Flash Point doesn’t stray very far from the template where Asian crime thrillers are concerned, and it’s doubtful viewers well-versed in the nuances of fighting styles will prize its contribution to advancing MMA in movies, even though audiences in Hong Kong registered their approval last year when the picture broke the territory’s ticket-taking records. Opening in three markets on the same day that Florida high school hunks square off in the MMA melodrama Never Back Down, its best chance for a knockout performance will be on DVD.

In its favor, Flash Point doesn’t take itself too seriously, and Hong Kong is showcased as a brighter, more airy metropolis than usual. The competition between the action and the drama sides of the project isn’t a fair fight, since there are four credited action choreographers and only one credited screenwriter. Considerably more importance is placed on the chops and the socks than the story, and yet the action sequences aren’t terribly memorable. Investing in more screenwriters might have helped, assuming they could have included less boilerplate dialogue and avoided making the narrative both confusing and formulaic. As is often the case with the genre, the way the line between parody and homage is negotiated seems problematic to the outsider.

The story takes place in 1997 before the handover of Hong Kong from Britain to China, during a period in which uncertainty about the future must have worried the criminal element as much as, if not more than, the law-abiding population. Donnie Yen, credited with directing the action segments, portrays flawed hero Detective Sergeant Jun Ma of the Serious Crimes Unit. Jun defends his brutal tactics (he’s not averse to going berserk on a perp) by insisting, “My duty as a cop is to catch thieves.” His primary adversaries—outside the force, that is—are three Vietnamese brothers named Sin. Obviously, when your surname is Sin, your duty is to break the law and Archer, Tiger and Tony and their triad-affiliated gang do so with gleeful, bloody abandon. Jun has been after them for years along with fellow cop Wilson (Louis Koo), who is deep undercover as the Sins’ bodyguard and Boy Friday. When Jun arrests Archer, Tiger and Tony go on a rampage. Wilson’s cover is blown, and his pregnant girlfriend is kidnapped just before he’s to testify in court against Archer. All this is relayed using a rather overactive, frequently swooping camera, lots of slo-mo, buckets of strawberry-jam blood and music that wouldn’t sound out of place on an episode of the A-Team.

One thing uniting these men on opposite sides of the law is how they dote on their mothers. Jun’s wise mom, a stickler for honor and duty who dislikes the city and wants to return home to the country, is the only person he respects. The criminal matriarch Mrs. Sin has Alzheimer’s (or maybe she’s just senile) and her doddering through a few crucial scenes provides some touching comic relief along with a crucial story element. Broader humor is provided by Jun and Wilson’s roly-poly Chief Inspector boss. The noteworthy action set pieces include a chase through a street market and the long fight finale, which stands out for being set in a lovely pastoral precinct as opposed to the urban jungle. Still, only those who know MMA inside out will be able to parse the showdown and discern innovation. The movie’s third memorable sequence, though not because it’s smoothly staged, occurs when a bomb is tucked inside a chicken and delivered to Wilson’s apartment.

Flash Point invites comparison with the vastly superior, though not much easier to follow, Infernal Affairs —the Hong Kong thriller about undercover cops and violent thugs that Martin Scorsese won an Academy Award for remaking as The Departed. Don’t expect an Anglicized version or any Academy Awards to flow from this one; but again, there’s no indication the filmmakers want it to be taken all that seriously. The movie’s heart is in MMA and the end credits roll alongside outtakes and behind-the-scenes footage taken on set during filming of those scenes. Martial-arts aficionados and anyone interested in the mechanics of fight choreography may want to study Flash Point more closely. It doesn’t warrant much scrutiny from the rest of us.